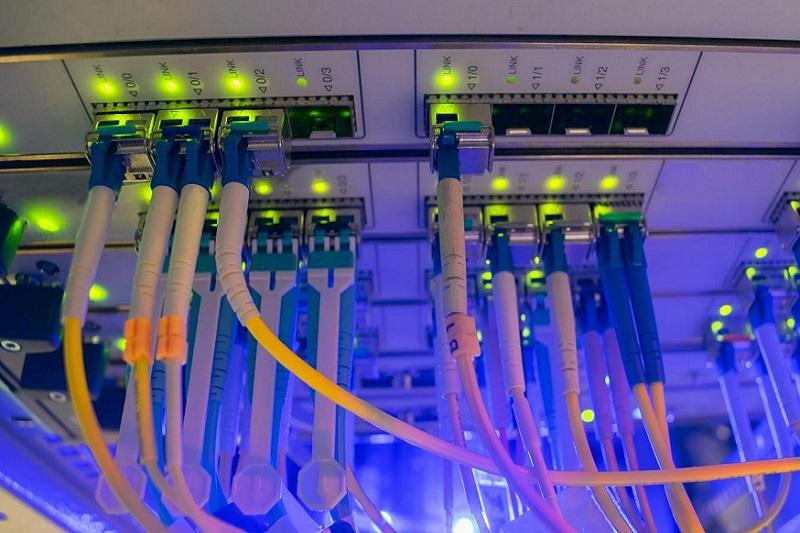 Communication Networks Play An Important Role In The Success Or Failure Of Large Organizations.

Network Architecture, protecting them from all kinds of risks, especially security risks, is considered to guarantee the survival of organizations.

Understanding the structure of data networks helps us better understand network vulnerabilities and focus on areas vulnerable to cyber-attacks.

In communication networks, network architecture refers to how organizational networks located in a building or adjacent buildings are connected. Information is transmitted on the web without the slightest delay and error.

This article will teach us how to implement enterprise networks and data centers. 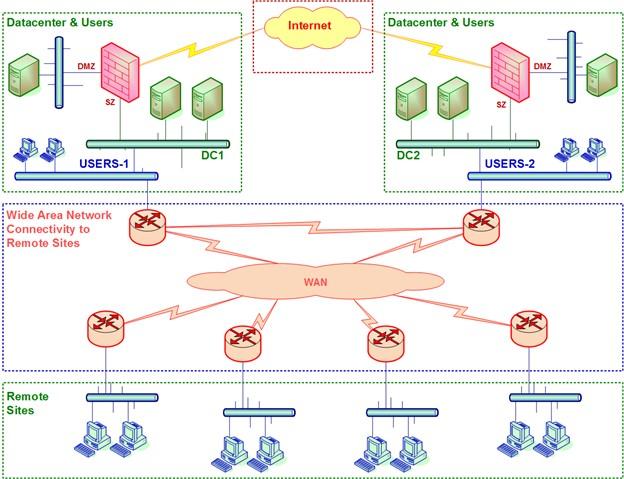 In the center of the chart, we see a WAN, which includes routers that connect to the Service Provider (SP) network, which is responsible for connecting local area networks and the Internet. At the bottom of the chart, remote sites (branches) link to the organization’s core network through a service provider network.

If one data center fails, another can replace it in whole or in part. One thing to keep in mind when designing user networks is the number of organizational users outside the organization (telecommuters), the geographical area, and the number of branches of an organization. 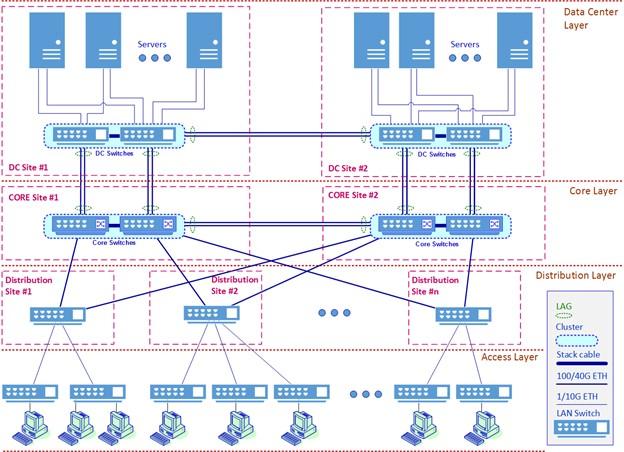 An important point to keep in mind when implementing such networks is choosing the right equipment, such as switches responsible for managing traffic and workloads. In general, core switches have more reliability, better features, and capability than distribution switches; therefore, good routing capabilities and preparation of an optimal and stable transmission structure.

In Figure 2, the data center switches are located at the top and are connected to each server via two cables.

These connections have a dual purpose; The first is to ensure that the redundancy principle is achieved so that if one of the cables and transmission channels fails, the other manages the transmission process. Second, they can link aggregation to make more switching capacity available. Also, communication channels can be on a fiber or copper substrate.

In the middle of the image, we have the central switches. As the name implies, these switches are at the heart of the enterprise network. They are responsible for communicating between the user network and the data center and allow remote sites, the Internet, and other networks to share with the enterprise network. The connection between the central switches and the data center switches can be implemented in Layer 2 or 3, with or without overlapping technologies. 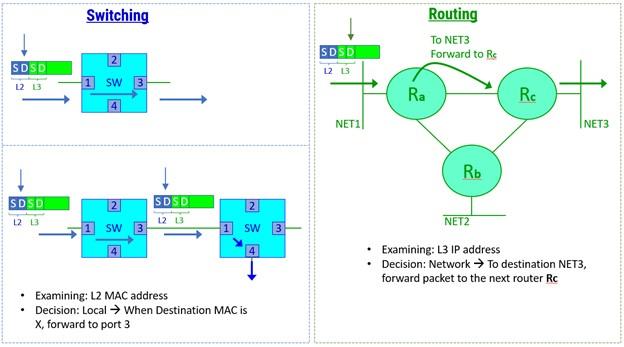 At the bottom left, we see how a frame passes through the network of switches. The frame enters the button on the left, which sends the packet to port 3. Port 3 connects to port one on the right switch, which looks at its MAC address and forwards the box to the right button, port 4. Decisions about how to send frames are made locally. That is, the switch decides without interacting with other controls so that no additional load enters the network.

We generally use Layer 2 switches to connect users to the network. We use Layer 3 buttons at higher levels, the distribution level, the core, or the data center, to divide the network into smaller networks (subnets).

In Figure 4, we see a standard router on the left and a Layer 3 switch on the right. Then in a normal router, devices such as personal computers or Layer 2 switches are connected to it.

Layer 3 interfaces (called VLAN interfaces in Cisco equipment) are software interfaces configured on the switch. Here, virtual local area networks (VLANs) are configured, an L3 interface is assigned to each, and external equipment is connected to the switch’s physical ports. And In layer three buttons, the hardware and software requirements we need to send and receive data packets are provided as a single product. 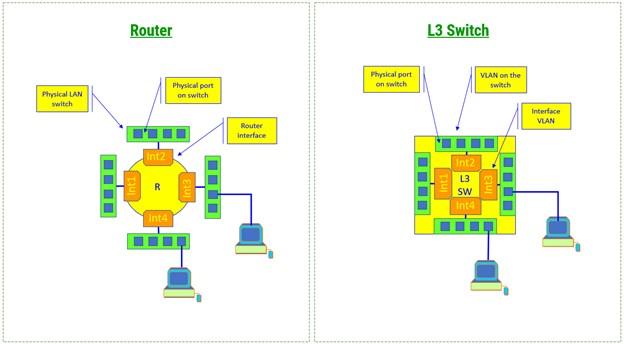 Virtual LANs and network splitting into different subnets have many advantages. They give us more design flexibility, as each section can have an IP subnet with permissions and access rights to its servers. It is possible to implement routing protocols. , Clients receive all-broadcast messages only on their subnets, and any cyber attack only affects that subnet. These are just some of the benefits of networking.

One of the significant challenges that network designers and architects face is choosing the architecture on which the enterprise network is to be implemented. One thing to keep in mind about Layer 3 architecture is that Layer 3 can be implemented anywhere in the network. When Layer 3 is implemented in the main switches, their IP addresses will be the default gateways for users. When layer three is implemented in data center switches, their address will be the default gateways of the servers. The two most widely used topologies used by network experts when implementing enterprise networks are shown in Figure 5. To the left of Figure 5, we have the following settings:

Virtual Local Area Networks (VLANs) Configured on Main Switches: Here, VLAN 50 and VLAN 60 are users’ local area networks. Each user has a virtual LAN, multiple physical ports, a logical L3 interface, and a VLAN interface (if using Cisco equipment). In the example above, the VLAN50 IP address is 10.50.1.1/16, while the VLAN60 IP address is 10.60.1.1/16. 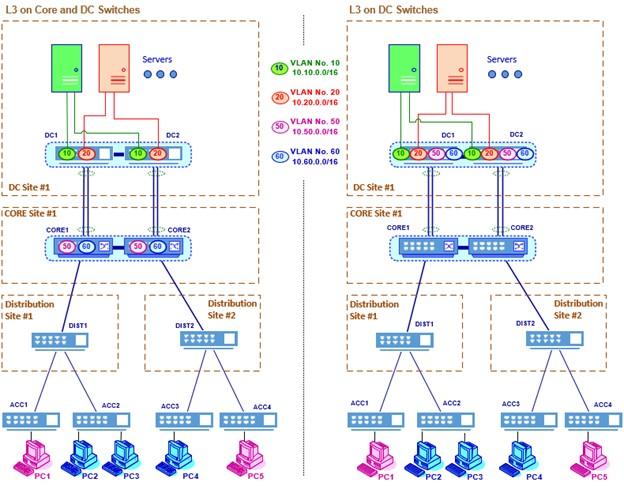 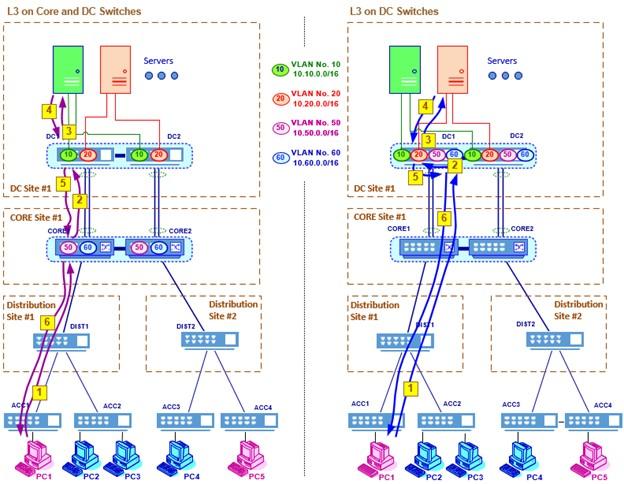 In an enterprise network, under normal conditions, when all network components are working smoothly, the data transfer flow is as follows: 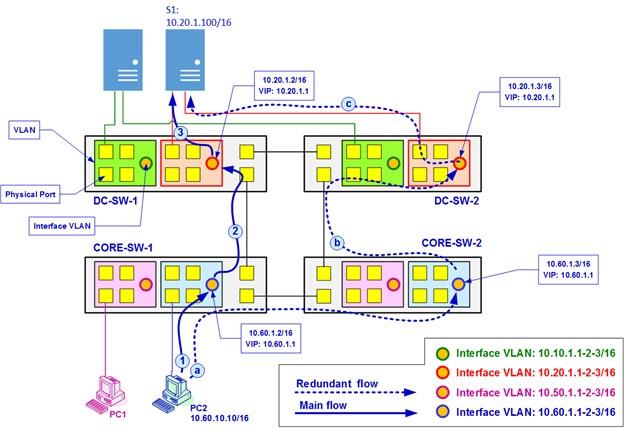 As you can see, the design considerations of a data network are very detailed, so each design must be tailored to the needs of an organization. Note, however, that unless you have a good understanding of the structure of a network, you will not be able to implement an integrated network with the best performance and a high threshold for failure.