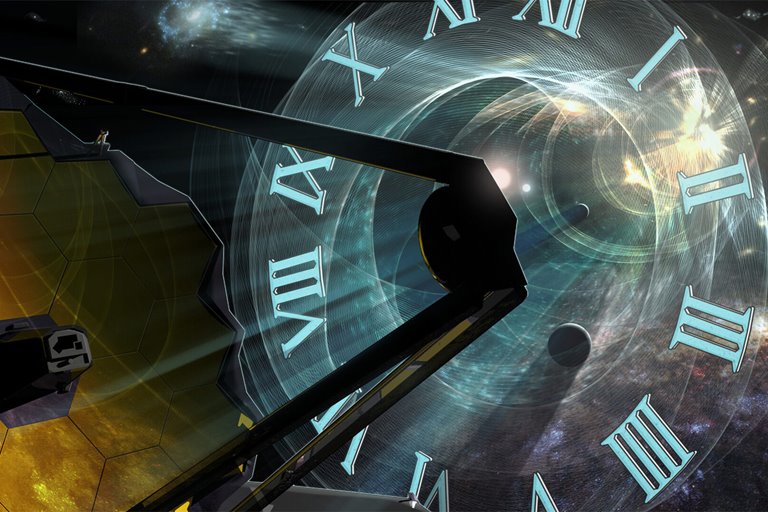 The James Webb Telescope Has Detected The Most Ancient Light Ever Seen. But This Is Just The Beginning, And Our New Time Machine Will Soon Take Us Further Back.

Last week, astronomers released a photo of the newly discovered galaxy by the James Webb Space Telescope. The new photo shows not just an ordinary galaxy but possibly the oldest galaxy we’ve ever seen. In this image, there is a small red blob that looks like a crushed tomato and is so blurry and lacking in detail that the viewer thinks they need glasses. If no description is given about the photo, no one can determine the nature of the crime depicted in it.

Thanks to James Webb, the world’s newest and most powerful space telescope, officially launched two weeks ago, we’ve discovered this ancient galaxy.

The light that reached James Webb’s sharp eyes from this galaxy had long since left its luminous confines before almost anything had come into existence. According to two separate teams of astronomers, that blurry tomato we see is the galaxy’s shape just 300 million years after the universe began.

By looking at this red spot, we are looking at a cosmic memory of more than 13.5 billion years ago.

As a result, many things have happened since then. During this time, our Sun was born, the planets were formed, life appeared on Earth, and the wise man stepped into the realm of existence. Now James Webb has turned back the clock.

The light from the most distant galaxies that our new space telescope is designed to detect takes billions of years to reach us. As a result, by looking at this red spot, we are looking at a cosmic memory of more than 13.5 billion years ago. James Webb becomes a time machine when he receives this ancient and worldly light. 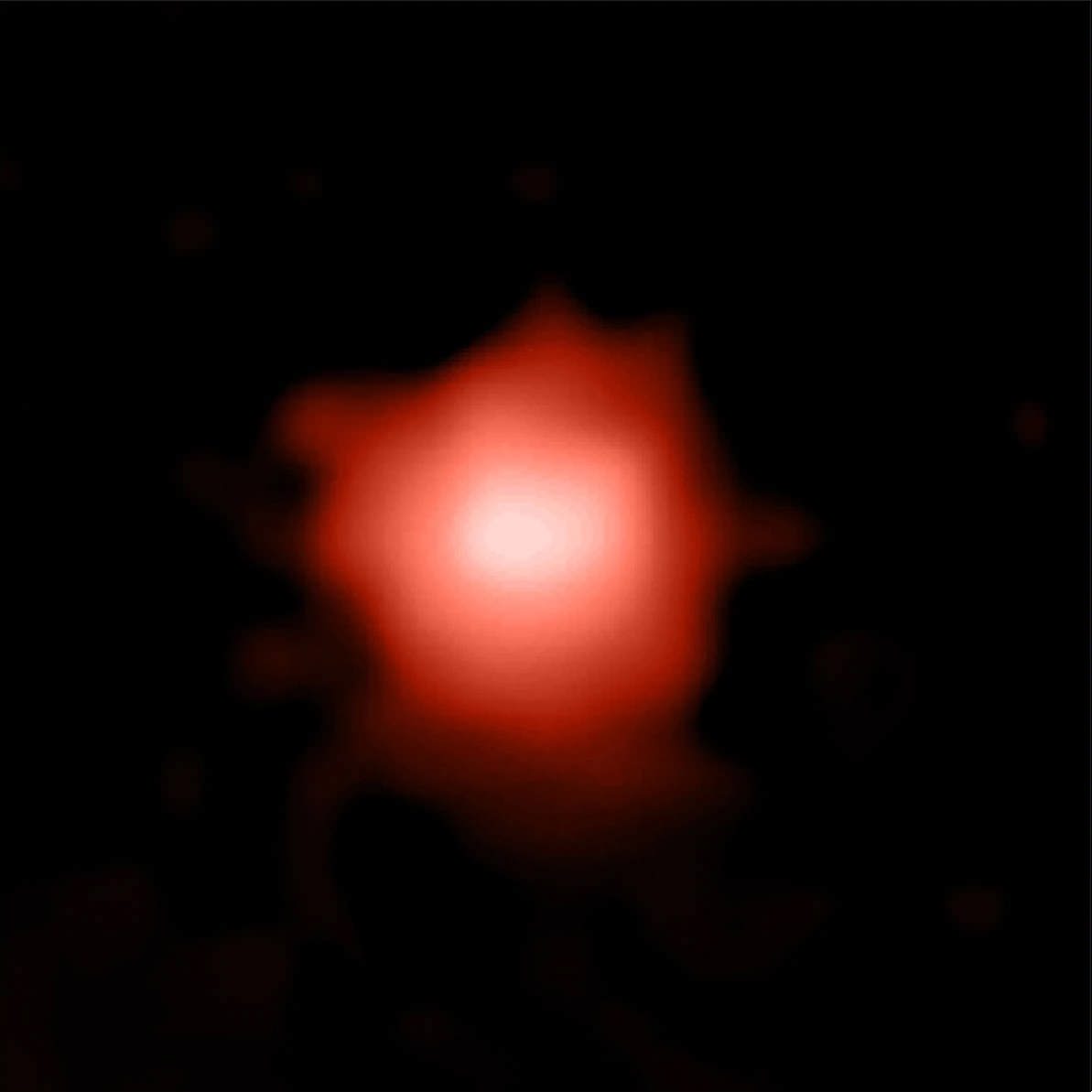 Cosmic tomato; Image of the most distant galaxy ever discovered.

According to The Atlantic, astronomers consider the recent discovery to be an initial discovery that, if proven true, could have extraordinary consequences for the next era of astronomy. None of the teams that observed the cosmic tomato expected to find a galaxy like the one discovered so soon in their first observations of this kind. Astronomers hadn’t even prepared the telescope to see the most distant objects it could see.

They only took a brief glimpse of the distant universe and saw distant galaxies like this one falling like leaves from a tree, says Gene Rigby, NASA astrophysicist and Project Scientist James Webb. Additionally, the discovered galaxy appeared in the night sky in a narrow field of view, smaller than a crater on the moon. Who knows what else James Webb will find by surveying an area of ​​the sky the size of the entire moon? With each more profound observation and further back of the tape, the telescope brings us closer to the Big Bang and reveals fainter galaxies.

We are about to turn back time.

The new galaxy is still only a candidate for the title of the oldest universe ever discovered. First, this finding has not yet gone through the peer review process. On the other hand, the astronomers who spotted the galaxy in the James Webb data (two separate teams working independently, one of which named the galaxy GLASS-z13 and the other GHZ2) still need more observations to confirm its distance. However, if approved, the cosmic tomato-red glow would break the record for the oldest galaxy set by the Hubble Space Telescope in 2015 by over a hundred million years.

The teams that found the candidate for the oldest galaxy determined its age by studying its light characteristics. The universe has expanded since the Big Bang, A process that shifts light to longer and redder wavelengths. The morning of stars in distant galaxies leave their source as visible light, But when they reach us, they experience a phenomenon called redshift. They are drawn to the infrared range of the electromagnetic spectrum.

Infrared is invisible to our eyes but excellent for James Webb’s sensors. Astronomers know that the redder the light, the more distant the galaxy. Rohan Naidu, an astronomer at Harvard University who led one of the teams, said the new universe “is very well detected at redder wavelengths; But when you go to bluer wavelengths, it disappears very dramatically. This feature is the main feature of these very distant galaxies. 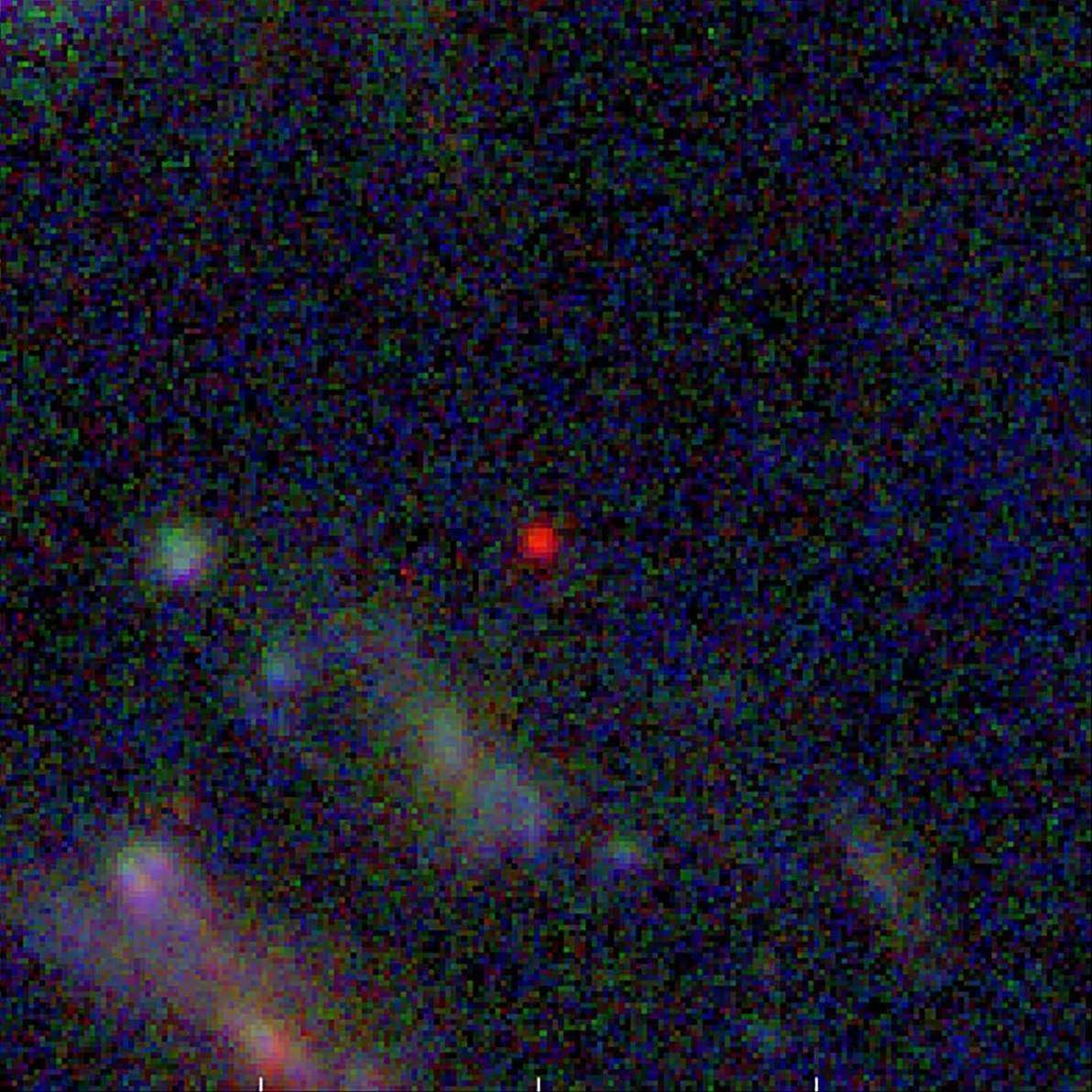 Image of the Galaxy GLASS-z13 out of zoom.

To confirm GLASS-z13’s distance from us, astronomers will need to measure the galaxy’s light using a different method to reveal details of its chemical composition. This technique is considered the gold standard in measuring cosmic distances, and scientists are confident that James Webb can do it. Two weeks ago, the telescope team released data showing how well James Webb can capture galactic features much closer than GLASS-z13 but still quite distant.

The light from that galaxy took 13.1 billion years to reach Earth, yet James Webb could detect distinct signatures of oxygen, hydrogen, and neon with remarkable clarity.

Tommaso True, an astrophysicist at the University of California, Los Angeles, and a member of another team that independently identified the galaxy, says knowing the chemical composition of the most distant galaxies can reveal essential details about how these galaxies formed and grew. True also managed the observing program that led to the discovery of GLASS-z13.

Now, astronomers have discovered that GLASS-z13 is much stranger than they thought. Astronomers had always thought that galaxies couldn’t have gotten very big early in the universe’s history, and roughly 500 million years after the Big Bang, the number of stars began to increase. But GLASS-z13 is very bright, showing that it contains many stars that together have a mass of one billion times that of our Sun.

The oldest lights in the universe have been around all this time.

Chris Lintott, an astronomer at the University of Oxford who studied galaxy formation and was not involved in the recent research, says the large size of the galaxy means that stars are forming quickly. Perhaps the production of massive stars is much easier than scientists predicted.

Whatever the explanation, the existence of galaxies like GLASS-z13 suggests that the end of the universe’s dark ages was a spectacular time, Lintot said.

It is just the beginning of getting closer to the front of the world. Now we have to wait for a flood of new scientific papers saying this is the most distant galaxy ever discovered, astronomers say! We won’t be surprised if the next candidate is announced today or this week.

“We’ll find out which galaxies are real and then study them,” Rigby says. We’ll have dozens or hundreds of galaxies identified at similar distances a year later. Then we will understand what these galaxies are made of, how much dust they have, and what is the story of the bright stars inside them.

Although the oldest lights of the universe have been around all this time, we are only getting to know them. “Throughout human history, we’ve been drenched in light from such distant galaxies,” says Lintot. But we have just made a device that can see this light.”