In this article, we want to compare CPUs and check the differences between Intel CPU generations. Also, we try to compare CPU generations as much as possible and away from technical words and tell you some technical points that can be useful when buying. In the future, we will try to describe each generation more precisely and in more technical articles. Here we will only take a general look at the topic of CPU comparison.

Intel is known as one of the technology giants, especially in making and producing processors. In this article, we will review and compare CPUs made by this company and check the differences between Intel CPU generations. In the following, we will try to provide information to compare CPU generations.

Comparison of Intel CPUs and introduction of its different generations

In 1968, exactly 50 years ago (from the fall of 1998), Intel was founded as an electronic component manufacturing company. The company first introduced the X86 architecture ten years later, in 1978. This architecture has been the mother of many subsequent processors made by this company or other manufacturers. However, the story of the development of processors and other parts of this company did not end only with this architecture. In the following years, we saw more tremendous developments in the field of processor development.

A look at the history of Intel

It was the first time in 1971 that Intel announced that it had produced a processor called the 4004. This processor added many technical terms and words to the technical dictionaries of the time, which we still hear and use in later years.

The 4004 processor had a clock speed of 470 kHz, and the dimensions of its transistors reached 10 microns. These innovations continued in Intel’s products, and the 8008, 8080, and 8085 models were also made with them. Each of these processors had advantages over previous generations in terms of processing power and speed. However, the speed of many of these processors was still much lower than what we know as a processor.
Regarding many technical issues in CPUs, we will publish other articles in the future. Here, we only discuss the difference between Intel CPU generations.

Comparison of CPUs manufactured by Intel

Since 2008, Intel has introduced its innovations as Core I series processors. This series of processors was a replacement for the previous Core 2 series. A few years after introducing the first Core I series processors, we saw the introduction of Core i3, Core i5, and Core i7 models. Each of these models had superiority in energy consumption and more power than the previous models. After a few years, we saw the production of all kinds of CPUs. Below is a list of these processors.

There is hope that by reducing the number of transistors to 5 to 7 nanometers shortly, we will see new surprises in the field of processor production. However, the success of the last three generations of processors is still in doubt.

Comparison of CPU generations and their diagnosis

To compare CPU generations with each other, we must refer to the specifications listed on it. Numbers are written on the processors, which we will interpret below. For example, it is recorded on a processor with a Core i3 2200 model. The first number from the left is “2”. This number indicates that your processor belongs to the second generation. If you see a triple number, for example, Core i7 960, your processor generation is the first generation. 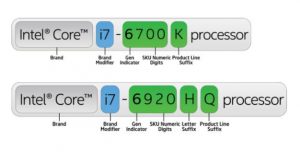 As we have seen above, new generations of processors with new capabilities are introduced to the market every year. Each of these generations had changes in the dimensions of the transistors, and the number of transistors, which were different in terms of the architecture used them. We saw a 10-15% improvement in each generation over the previous generations. Their consumption usually shows a 30% reduction in energy consumption. This trend has caused us to see more processors and information processing power acceleration every year.

The latest generations of processors are offered to the market.

A look at the types of Intel processors

Review of suitable processors for mobile

Comparison of CPU generations and a look at Zeon CPU

One of the most familiar names for server CPUs in comparing CPU generations is Intel Xeon processors. This processor is made by Intel and uses 64X microprocessors. These processors are designed for industrial use, such as servers or workstations. The first category of these processors was launched in 1998. The basis of their work is not much different from personal computer processors, but more advanced structures are used in them. They can also use ECC memories and support more cores.

Intel Xeon processors can support higher RAM capacity and have more internal cache than PC processors or other series. As a result, availability, confidence in operation, and serviceability or the RAS scale, which stands for Reliability, Availability, and finally Serviceability, have increased in these processors. In this processor, it is possible to achieve more power by using software and hardware structures such as Machine Check Architecture. In Zeon CPUs, it is possible to expand the processor’s capabilities using MCE technology.

Some processors of this series of Intel products can use QPI BIOS, which can be installed on two, four, or eight sockets.

Some Zeon CPUs are also available for home models and have a lower speed rate than their more industrial counterparts. These processors can process images without using any external graphic card, thus providing users with faster speed. One of the reasons for this is that in some cases, such as processing videos or images in computer processing, speed is very important in graphics processing.