This year’s winners are stunning photos and new perspectives on the world.

AAn opening reception for artists, invited media, photo editors and industry insiders for an evening of art and networking appreciation during one of the world’s largest international events dedicated to photography. ll award-winning photographers’ works will be exhibited at the Siena Awards Festival in Siena, Italy, in November. Siena is a city in Tuscany, Italy, and the capital of Siena province. The historic center of Siena has been declared a World Heritage Site by UNESCO.

Award winners from this festival are covered by the press coverage of publications and media around the world. This encounter can lead to global recognition and fame of their works. The winners and nominees of the Siena Awards are featured in important publications such as The Guardian, El Pais, Internazionale, Corriere Della Sera, The Times, The Sun, CNN, Spiegel Online, Daily Mirror.

In this festival, full copyright is reserved for photographers’ works. The drone awards competition is only for the promotion of the photographers themselves and in connection with the marketing of the competition itself.

Each year in this contest, one image wins the Grand Prix of Drone Photography. The title of drone photographer of the year 2020 was awarded to Jim Picot  (Australian photographer) for the photo “Heart of Nature”, which is very incredible; To the extent that it doesn’t seem real. What is captured in this photo by this photographer is a school of salmon in Australia. The photo was recorded when a shark was swimming among the fish; A shark swimming in a heart-shaped formation created by fish.

Drone photographers from 126 countries entered the competition and submitted their work in 8 separate image categories. Life during covid 19, nature, people, sports, urban architecture, wedding and animals are among the categories of this competition.

All the winning images in this competition will be exhibited in the exhibition “Above us only the sky” from October 24th to November 29th at the Accademia dei Fisiocritici, one of the oldest science museums in Italy. 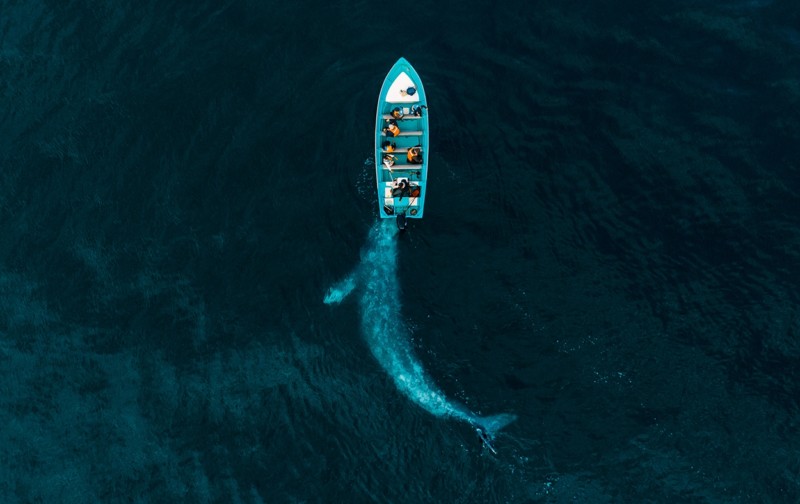 At the end of the gray whale season, I noticed that a gray whale had been playing with the boats for the past three years, pushing them gently. So a year later we visited that place and it was unbelievable that the gray whale appeared next to us and this photo is the result of this meeting.

Classification of life in the era of Corona