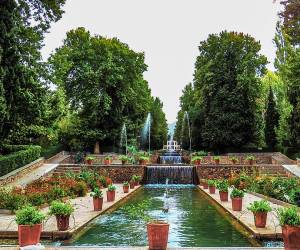 The attractions of Prince Mahan’s garden in Kerman

This garden is located in a desert area and 6 km from Mahan city on the Bam-Kerman road. It is also at the foot of the snow-capped mountains of Japan, and it is interesting to know that the beauty of this garden has made it a UNESCO world record.

The gardens left to us by our ancestors are a unique style of Iranian art and architecture that can be exported to other parts of the world as souvenirs of Iranian culture. There are many famous gardens in Iran, and it can say that Shiraz is one of the largest owners of pristine and beautiful gardens, all of which are made by Iranians. For example, Shazdeh Mahan Garden is one of these unique gardens in Mahan city.

Shahzdeh Mahan garden has gained its most beauty by taking advantage of the natural beauty of its surrounding areas. This garden attracts every viewer with its captivating beauty in different seasons of the year. In continuing this part of tourism, we would like to introduce you to one of the unique gardens in Iran.

A passage on the background of Prince Mahan’s garden

This garden has a pool, a high wall, and an atmosphere that leads to a large mansion. The emergence of such parks dates back to the reign of Cyrus the Great and the Achaemenid period when Cyrus organized the royal garden and built many gardens around the palace. Over time, this style of architecture evolved in the Sassanid and post-Islamic periods and has reached the city you see today. Show Iranian art to the world.

Everything about Prince Mahan’s garden

Two kilometers from the city of Mahan and near the town of Kerman, there is a beautiful garden called Prince Mahan, which build on the slopes of the Tigran mountains to benefit from the beautiful nature apart from the pleasant weather. It is interesting to know that at first, the then ruler of Kerman, Muhammad Hassan Sardar Irwani, ordered the construction of this garden. After many years, the park was built by the next ruler of this city, Abdul Hamid Mirza Nasir al-Doula, and of course, this work remained unfinished.

The restoration of the Shazdeh Mahan garden dates back to 1357, but unfortunately, it was damaged by an earthquake in 1360. It has been restored and is now well and more sensitively protected. As the 13th Iranian work, this mansion was added to the UNESCO World Heritage List, which dates back to 2013 and is very important, and its name is on the list of the most attractive tourist places in Iran. 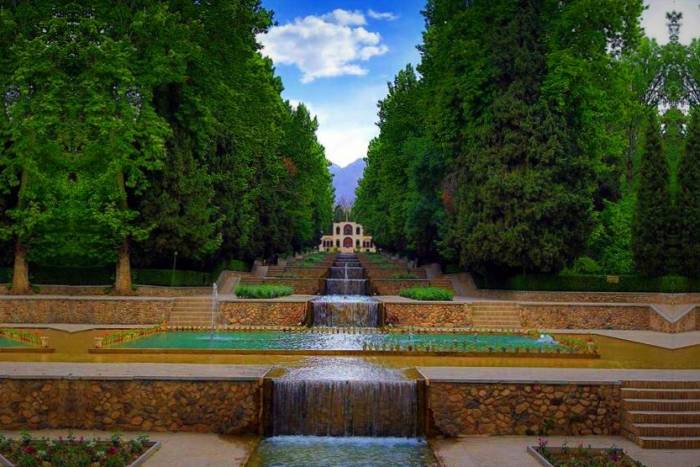 A look at the extraordinary architecture of Prince Mahan’s garden

One of the Iranian garden beds is called Shahzadeh Mahan Garden, which has a history of steps and flats and has unique architecture. The area of ​​Shahzdeh Mahan Garden is about 5.5 hectares, built in two western and eastern complexes. And it is considered one of the most beautiful Iranian gardens. In addition to its original architectural style, one of the prominent features of this building is the presence of fountains that operate only according to the laws of height and physics. This garden is 7.5 hectares, 407 meters long, and 122 meters wide, and it is separated from the outside space by a long fence.

The beautiful entrance that can be seen at the garden’s opening is stunning and eye-catching, similar to a picture frame that depicts the garden’s ponds, mansions, fountains, and trees. The main building or the pavilion at the upper end of the park includes the royal palace, the main building, and the bathroom of the garden buildings.

Since all the gardens in the Qajar era were built as gardens, settlements, gardens, castles, and hunting grounds, It constructed the Prince’s garden for recreational and residential use. The significant building of the park, i.e., the upper house and the head of the house, are enough to confirm that the garden is a residence. Wooden fences surround two huge areas in front two.

The construction and architecture of this complex are such that it can allow its residents to use unique external and internal views. I watched it and enjoyed it.

Passing through the incredible beauty of the garden, we reach the mansions and pavilions in the east and west of the park, which are built on two floors, and unique Iranian architectural elements have been used in their construction.

The secret of empty tiles

An exciting story that attracts a lot of attention from visitors is the empty place of three pieces of tiles on the tiled arch. If you see these open places, you will unconsciously wonder why this happened, but you should know. There is a fascinating story behind it. It has been heard that the owners of the garden buildings were doing a lot of injustice to the people when the architect was completing the arch—the news of the death of the granddaughter of Naseeruddin Shah, Prince Abdul Hamid Mirza Naser al-Dawlah.

He hears and is very happy, slams the plaster in his hand on the wall, abandons his work, and runs away. The empty spaces of these tiles are reminiscent of a historical memory that stands out in the front of Prince’s garden and is strange and yet interesting for many visitors and tourists. 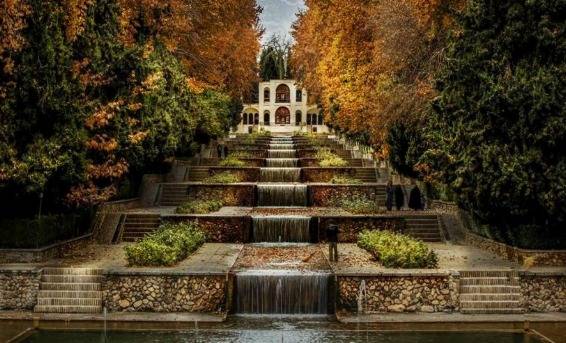 The attractions of Prince Mahan’s garden

Before you reach the entrance of the building, at the bottom of the two-story Sardarkhana garden, there is the famous Shahzadeh garden, which surrounds the park’s opening as a mediator between the greenery and the dryness of the desert. This place prepares you to watch the fantastic atmosphere of the garden. The head of the park presents an image of this work in front of you like a picture frame, and if you stand under its arch, you will see a fantastic view of fountains, ponds, and the main building, and in a way, it is the most beautiful image in your mind.

You will get a charming picture of fountains and waterfalls with the background of the snowy peak of Jopar and its heights. It will be beautiful to see the sloping surfaces and the harmonious arrangement of trees, gardens, and central platforms, and finally, a white building named Balakhaneh stands out.

The height of the entrance gate of the main building of the house is 3 meters. After passing through this gate and through the intermediary space, you will direct inside and see the stairs leading to the side rooms.

This building is a residence and a place to sit and watch because it has rooms on its upper floor and also because it has the role of an entrance. Apart from this entrance, there are other ways to enter the garden, considered secondary entrances on the two longitudinal sides of the complex.

The upper house of Bagh Prince

As we said, in the highest part of the building complex called Balakhane or Shahneshin mansion, which is considered the seasonal and permanent residence of the owner, if you want to reach this building, you have to walk on the surface of the yard, which is a mixture of rubble and cement carpet. The first level of the bed is in the middle of the garden and has a platform in the middle right in front of the upper entrance of the house. Using an internal staircase is a way to reach the second upper floor of the house.

This building is located at the highest point of the complex and the end of the central passage of the garden, and in a way, it can say that it is the only building that was built separately from the main wall of the park. By standing on the balcony of the upper house, you can watch unique images you will never see. You have not seen such scenes, and they will be hacked into your mind forever.

In front of the mansion is a large pond with five fountains, the water of which continues its way in the form of a waterfall and is poured into the stone pathway. It is interesting to know that a restaurant has been opened in this building, which is run by the private sector. 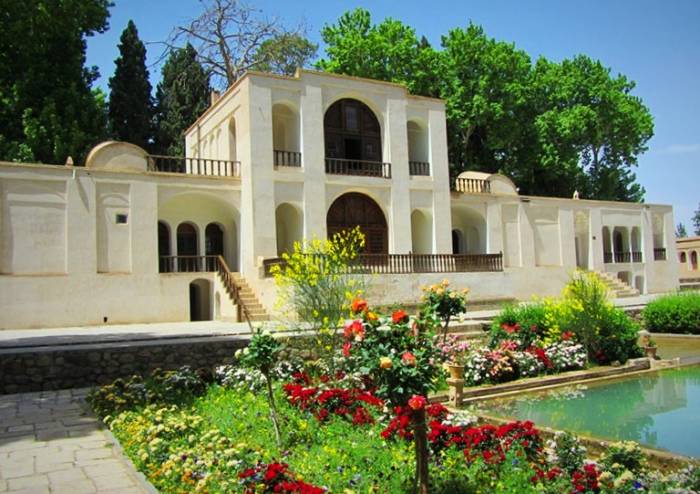 Prince’s garden has a vast difference from other parks in Iran, which is related to a part of the garden behind the upper house, which allows residents to experience a more private space apart from the main area in this secluded garden. Beautiful passages with shady trees, fruit gardens, and parallel sidewalks polish the soul and body of the visitor. After reaching the waterways of the secluded garden, the water flows from two sides to the trenches of the central park.

Be a watchtower and a leader’s house.

The permanent residence of the main guard of the garden is known as Zaeem Bashi, part of which faces the back space of the house. It is located in the upper part of the bathroom and is separated by the cylinder of the Azan watchtower. Due to the great depth of this building, compared to other rooms around the garden, it protrudes the most from the wall of the complex. 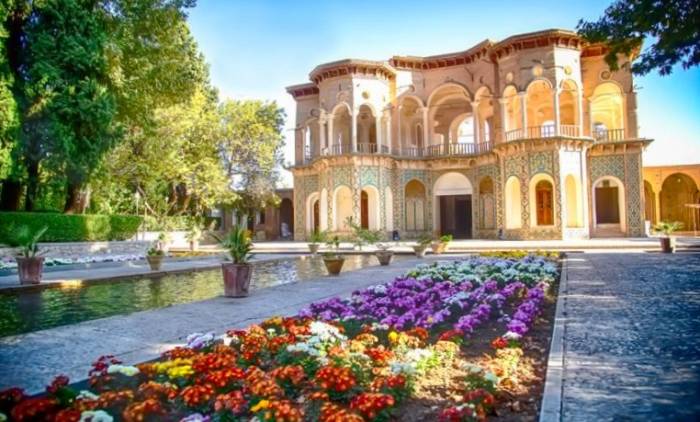 The most intelligent thing has been done about garden fountains because they have been activated by applying the slope and without using any other force based on the height difference. And in it, vats have been used, which, as a result of being connected, play their role well, like building pipes. Inside these vats, running water flows in the garden until it reaches one of the vats. It plays the part of the knee in today’s plumbing systems, reaches and erupts from there.

There are few gardens like the Prince’s garden, which has many fountains. The interesting thing you should know is that there are no fountains similar to these in Iranian gardens, and it is possible to get ideas for their construction from European gardens and fountains. has been

A look at the irrigation system of the garden 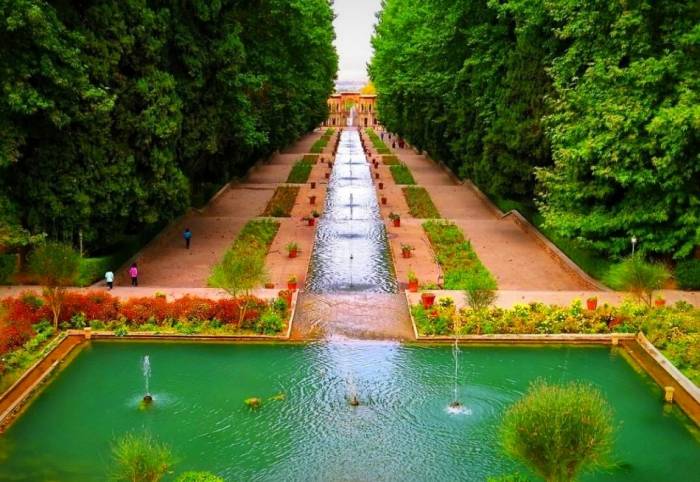 Regarding how water flows and how it leaves the park, it can say that the garden’s slope causes water to soak in the middle of the garden from top to bottom in the form of a stream. The garden’s water supply is the Tigran aqueduct, which originates from the heights of Japan. This water from the highest part of the garden enters the distribution system, and the irrigated system has started a fantastic flow.

This way, from the front of the Balakhane mansion to the entrance, the water flow continues as a stream, and on both sides, a huge pond or pool can be seen. After this, water leaves the lowest part of the garden, enters the streams known as Chahar Bagh, and continues its way to Tigran village and irrigates the fields and gardens well.

After driving 25 km from Kerman-Bam road, and 6 km from Mahan city, you will reach a beautiful garden called Shazdeh. Inside this garden, a lovely restaurant is located in the Shahneshin mansion, which welcomes guests, sometimes in the park. A reception will be held. In addition to welcoming tourists, there are also suitable facilities for overnight stays for travelers.

This mansion has unique rooms for selling all kinds of rugs, carpets, and souvenirs, which are attractive and special on their own. By traveling to Mahan, apart from visiting this garden, you can call and enjoy the tomb of Iranian mystic and poet Shah Nematullah Vali nearby. Around this beautiful garden, it is possible to ride a horse for those interested in riding, doubling the trip’s pleasure.