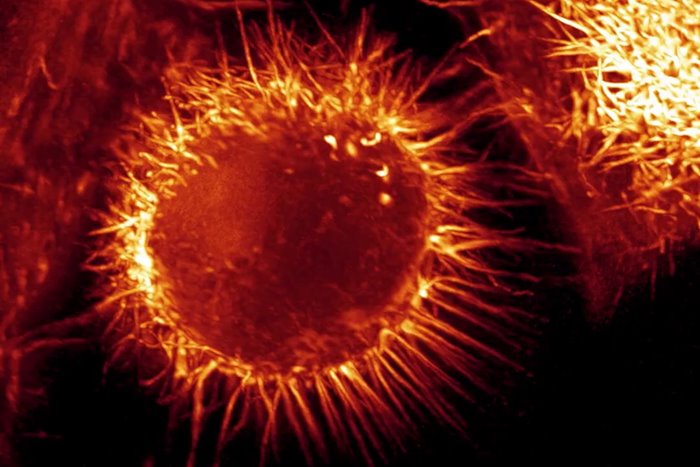 The selected works of the “Nikon Small World” competitions were introduced in the last months of 2019 in the two sections of photomicrography and microscopic time-lapses.

To watch the selected works in the microscopic time-lapse section of this competition.

“Small World in Motion” is the title of a part of “Nikon’s Small World” competition, which has hosted the works of artistic scientists every year since 2011. In this section, recorded time-lapses compete with optical microscopes. To watch these competitions’ selected works of 2019, stay with Zomit in the two areas “Selected Videos” and “Special Appreciation.”

Second place: Tomatoes, a type of parasite, swim in the body of their host, which is a dead arthropod; 1x magnification

5th place: developing mouse embryo; The stage of development of the neural fold and the formation of the neural tube; 16x magnification

Iron filings in a magnetic field

A star-shaped structure called an ester consisting of mesenchyme and microtubules in an animal cell; 60 times magnification

discharge of the radial canal into a contractile vacuole in a single-celled animal (probably paramecium ); 40 times magnification

The waveform pattern resulting from the activity of proteins in a cell of the frog’s body, which is created spontaneously before cell division; 10x magnification

Neutrophils (red) inside the hindbrain of zebrafish embryos infected with a fluorescent bacterium (green); 20 times magnification

the hatching of the smelly sen; 10x magnification

A species of ciliate swallows a string of cyanobacteria; 20 to 40 times magnification