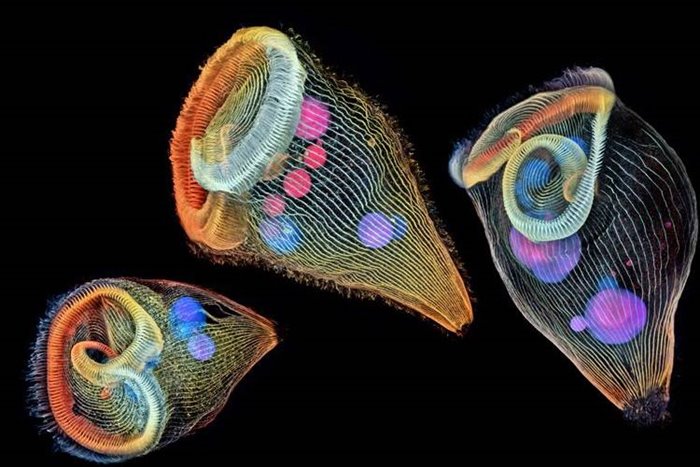 Every Year, Many Attractive Scientific And Natural Images Around The World Attract People’s Attention. In This Article, We Introduce Some Of The Most Attractive Of These Images.

2019 will be remembered as the year humans took the first image of a black hole. Also, this year, shots of some of the smallest living creatures and ominous signs of climate change were depicted. Here, we present the most outstanding images of science and the natural world as selected by Nature magazine. Click on the pictures to view them in their original size. 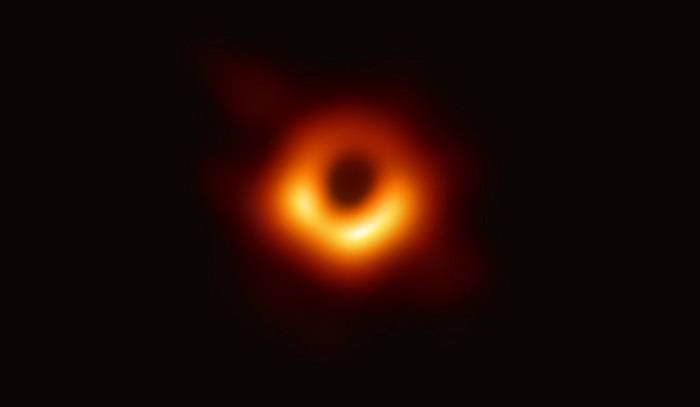 The first recorded direct image of a black hole and its event horizon was unveiled in April. The Event Horizon Telescope took this image. Researchers used eight radio observatories to record the ring of light around the void region at the center of the Messier 87 galaxy.

French researchers carved a spiral of microfluidic spaces on a silicon wafer to simulate blood flow in circulatory networks. This image was prepared using an electron microscope. 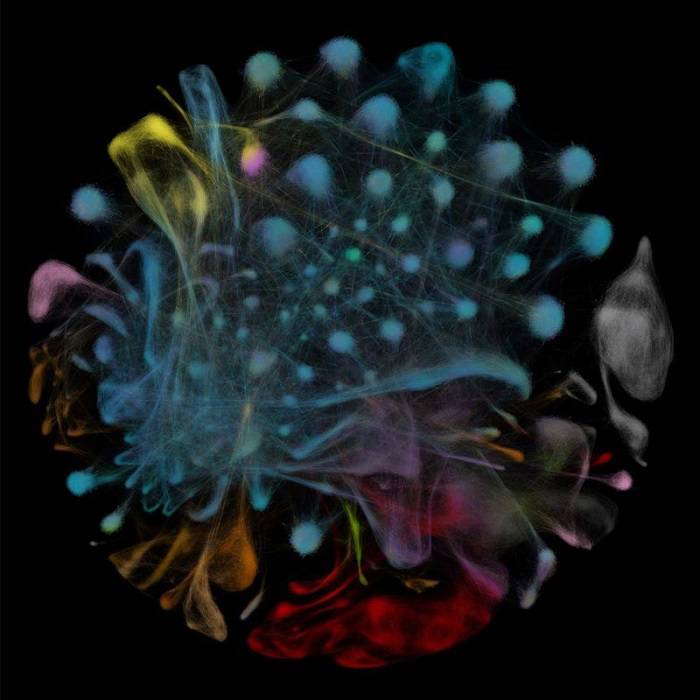 Each of the tiny dots in this ring represents one of about 100,000 rhesus monkey cells. Cells with similar characteristics are clustered together, and each color represents different tissues, such as the thymus and lymph nodes (blue) and bone marrow (red). 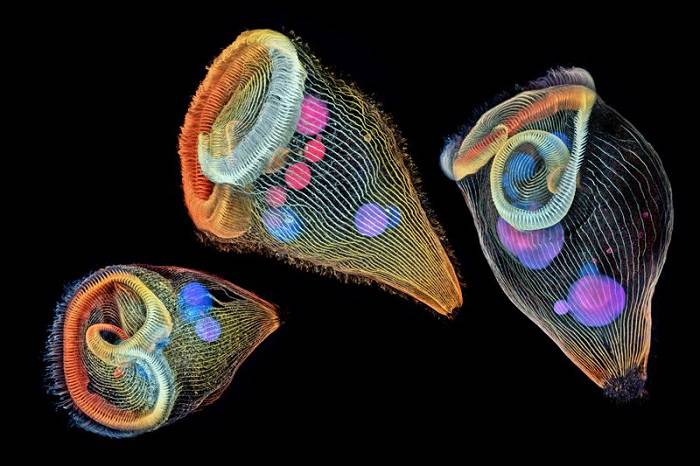 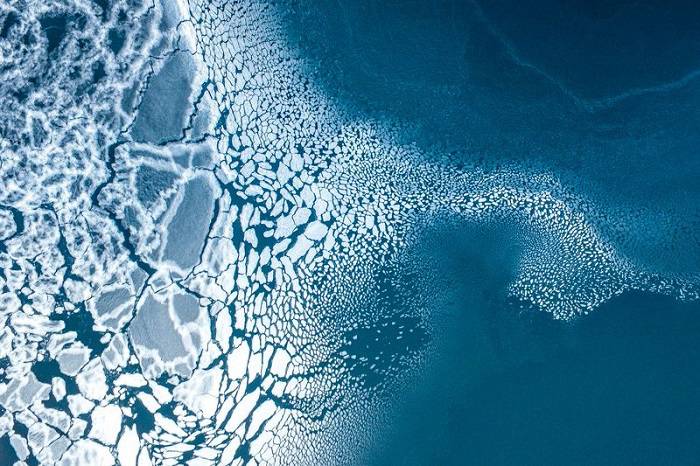 This aerial view of the sea ice in East Greenland was taken using a drone. Low levels of winter snow cover and heat waves in spring and summer caused significant melting of the Greenland ice sheet in 2019. 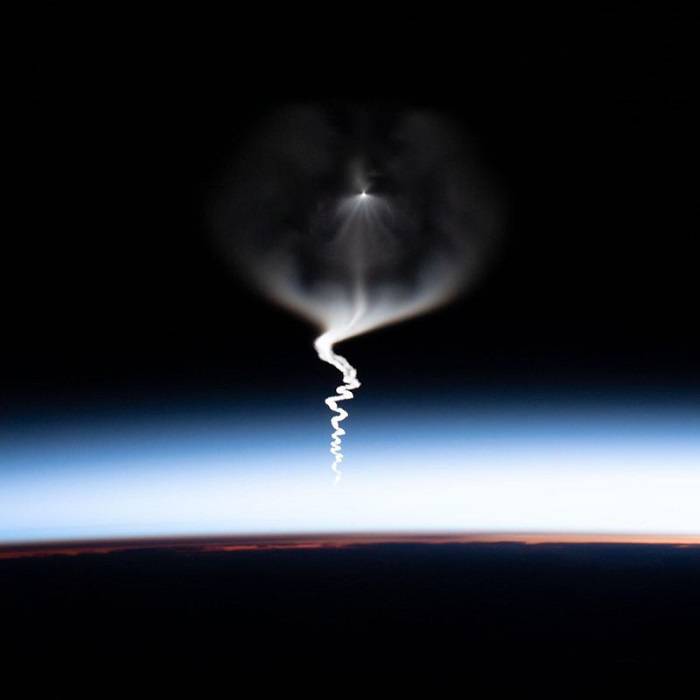 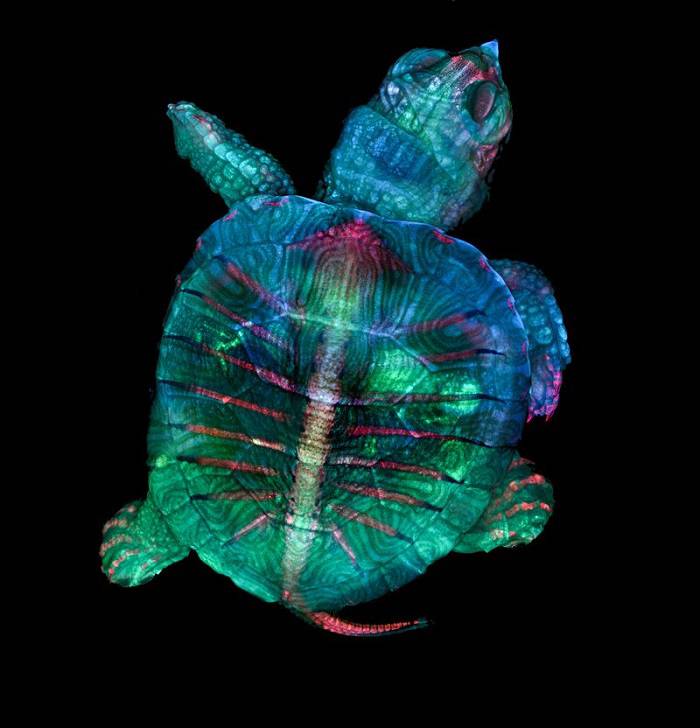 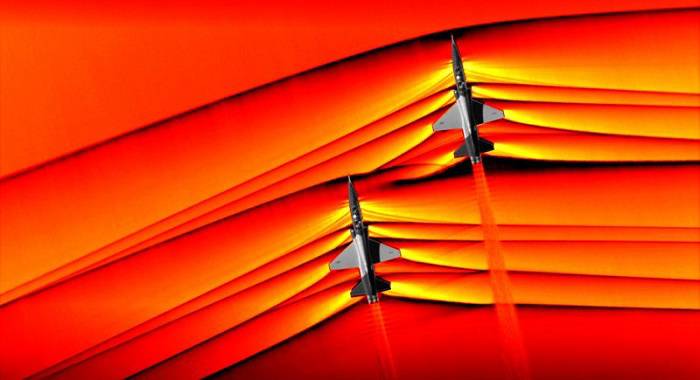 The false-color image shows shock waves from the US T-38 Talon supersonic aircraft, captured by NASA staff using an experimental technique of the plane above. The photo shows the rapid changes in air pressure that cause people to hear a sonic boom. This data helps aeronautical engineers design quieter supersonic aircraft. 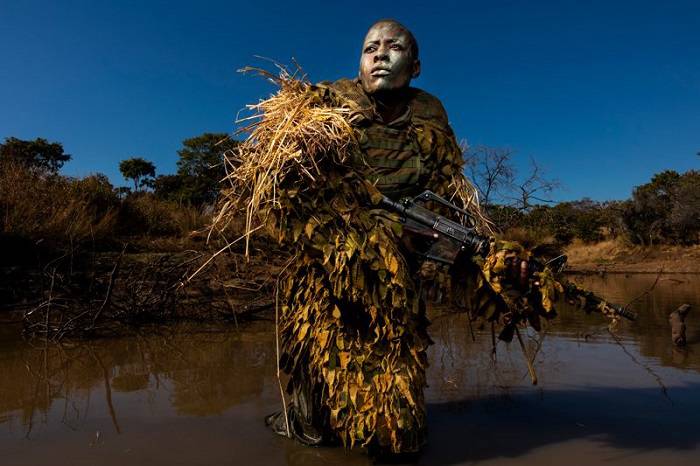 Petronella Chigombura, a member of the brave group (Brent Stirton) 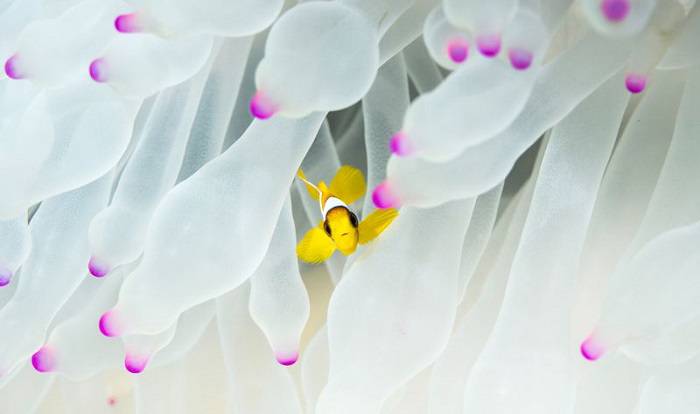 This fish is exploring bleached sea anemones in the Red Sea off the coast of Saudi Arabia. Anemones have a symbiotic relationship with algae, But when the ocean gets too warm, the anemones expel the algae and turn pale. 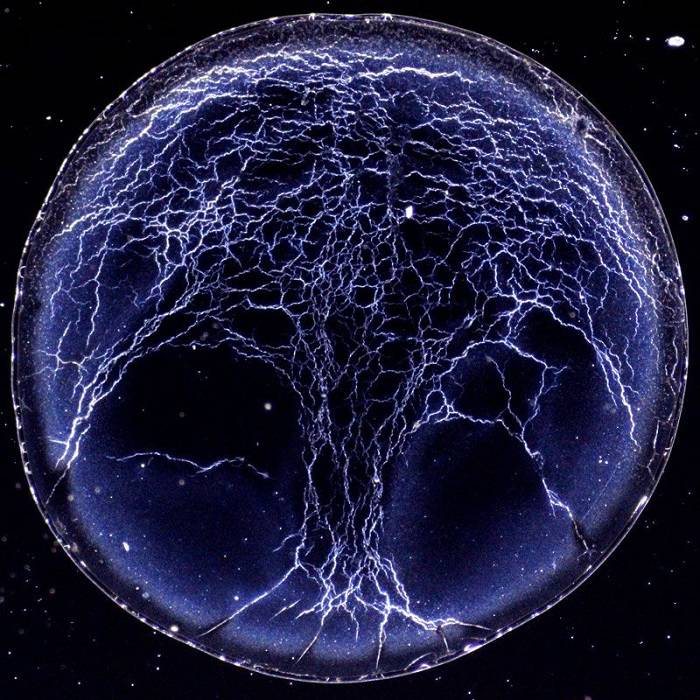 Microstructure of residual fat from the evaporation of alcoholic beverages (Stuart J. Williams)

This network-like microstructure is due to the fats that remain after the evaporation of a one-microliter drop of diluted bourbon whiskey. Fats dissolve in solid drinks, but the glass is codified when water is added. 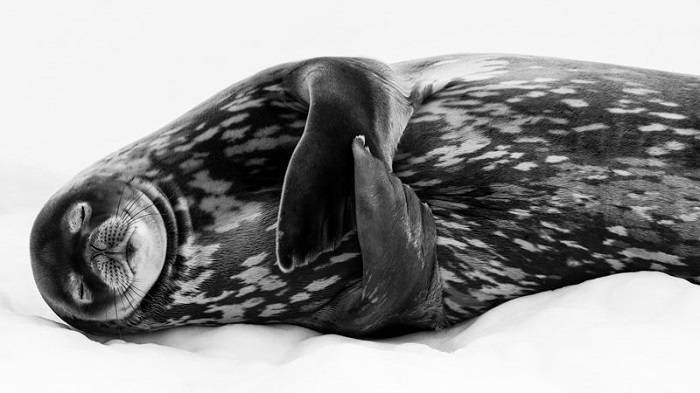 Sleeping like a Weddell’s jaw was one of the fascinating images of this year’s wildlife photography competition held by the Natural History Museum in London. After seeing thousands of heartbreaking images of climate change and devastation this year, this image of a Weddell’s jaw ( Leptonychotes weddellii ) was fresh air representing peace and innocence. 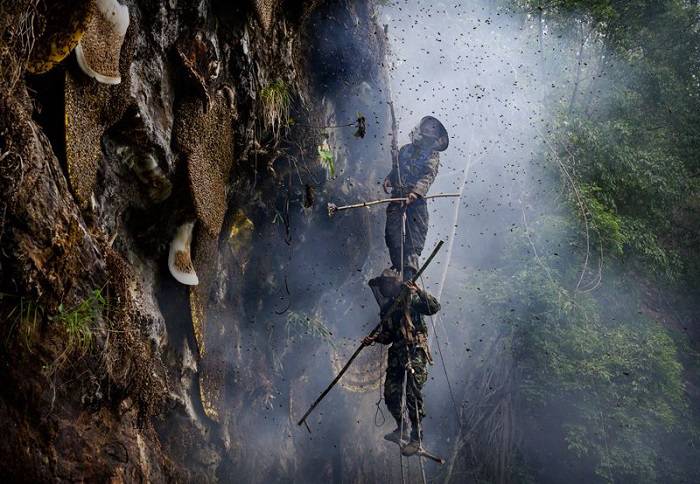 The striking image of wild honey harvesters hanging precariously from the edge of a cliff, surrounded by bees and smoke, is most fascinating. Wild honey harvesters living in southern China and belonging to the Lisu ethnic group risk their lives to collect precious honey from the hives of Apis dorsata bees. Although they are careful not to harvest too much honey at once, this traditional practice, along with the widespread use of pesticides and global warming, threatens bees and reduces their population. 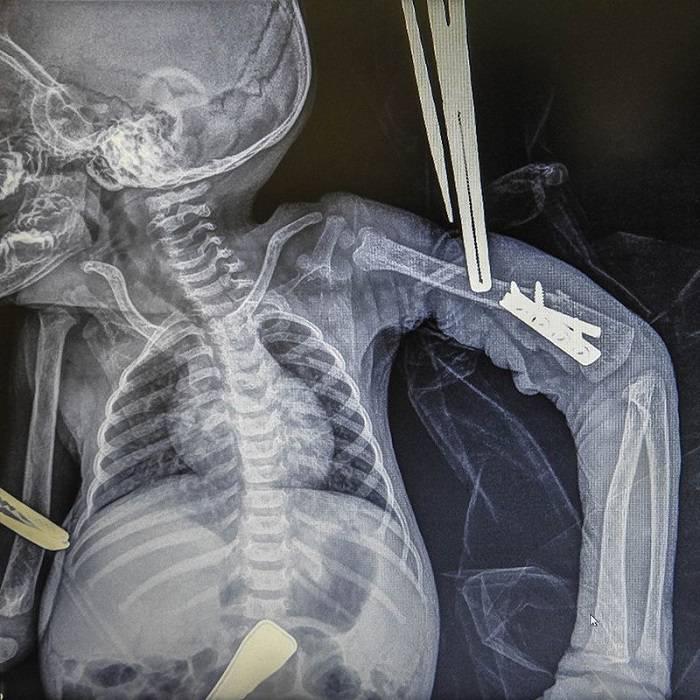 This is an x-ray image of a tiny Sumatran orangutan (Pongo abelii) with a broken arm. Conservationists rescued the animal, named Brenda, from a village on an Indonesian island where it was illegally kept as a pet. The charm of this image is in Brenda’s human-like state and the innocence and sacrifice of the wildlife protection center, which quickly operated on this animal. Sumatran orangutans are critically endangered and threatened by the expansion of oil palm plantations. 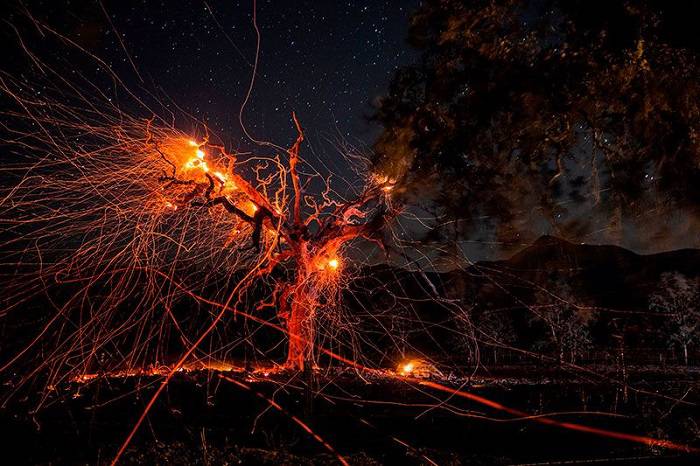 This long-exposure image follows a shower of bright ash from a tree engulfed in California’s October wildfires. The effect has created a beautiful picture of the devastation that reminds one of the incredible images of the 2010 eruption of the Eyafiatlaikotel volcano in Iceland. 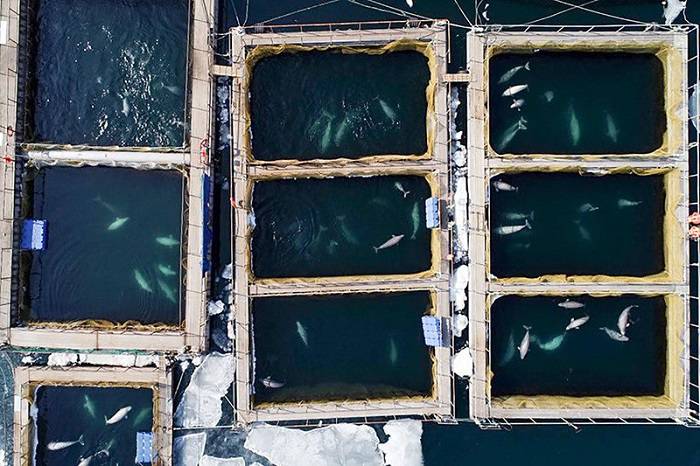 When wildlife is kept in captivity, the result is often cruel and tragic. This beluga ( Delphinapterus leucas ) and killer whales, discovered by drone footage in Russia in 2018, were to be sold to recreational aquariums in China, where their natural life spans are likely to be shortened. The publication of this image caused an international call to be announced for the release of these animals and attracted the attention of Russian politicians. In November 2019, the last animals were released from captivity and returned to the sea after the examination. 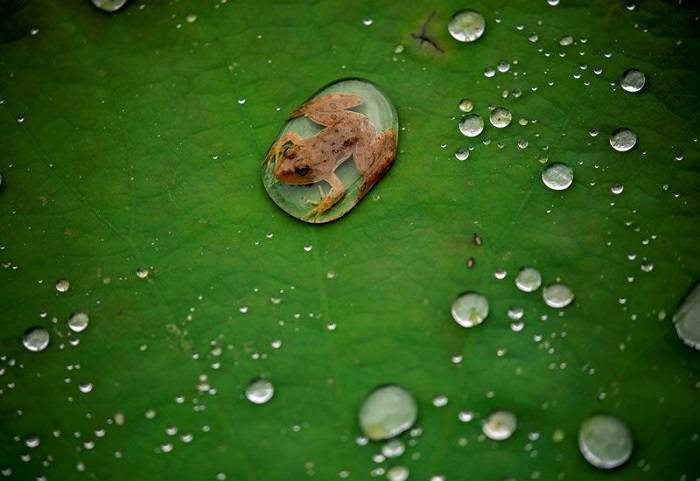 An example of the lotus effect: is a frog in the water (Agnese Abrusci)

This image of a frog on a lotus leaf in Lalitpur, Nepal, is a stunning example of the lotus effect. This work refers to the self-cleaning properties of lotus leaves derived from their water-repellent properties. Dust particles, or in this image, the adult frog is surrounded by droplets.

The reason for this is the presence of surface nanostructures. Scientists first described this effect in the 1970s, and since then, it has had many uses.

This picture shows that imitating nature is one of the best strategies for human progress.