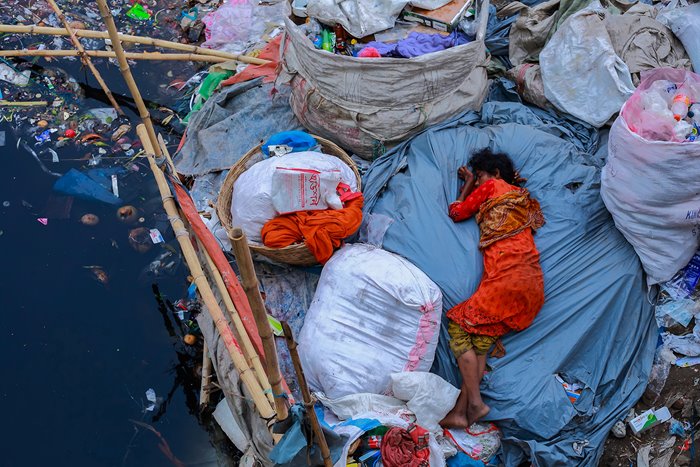 Climate change, Images that point to the depth of the disaster of human interaction with the environment and the danger of destroying the earth.

The winning images and films selected in these competitions will be shown in an exhibition at the Royal Geographical Society in London before the UK tour.

The prestigious Institute of Water Management and Environmental Management determines the winners of the best environmental Photographer of the year awards yearly. In its latest selected images, this institute has also highlighted images that take the opportunity to blink from the audience and show the real impact of humans on the environment.

CIWEM said in its latest statement that the winning images show the stark reality of how people and wildlife struggle with climate change’s effects. Creating such a competition and considering prizes for the winners is to bring about a positive difference in the choices of political leaders, decision-makers, relevant officials, and the general public.

The prestigious Institute for Water and Environmental Management decided to release the winning images with a press release on the same day as the United Nations Climate Action Summit in New York. Without giving any slogan, the prestigious institute of water and environment management announced the truth about the global climate crisis with its selected images.

The winner of the Environment Photographer of the Year 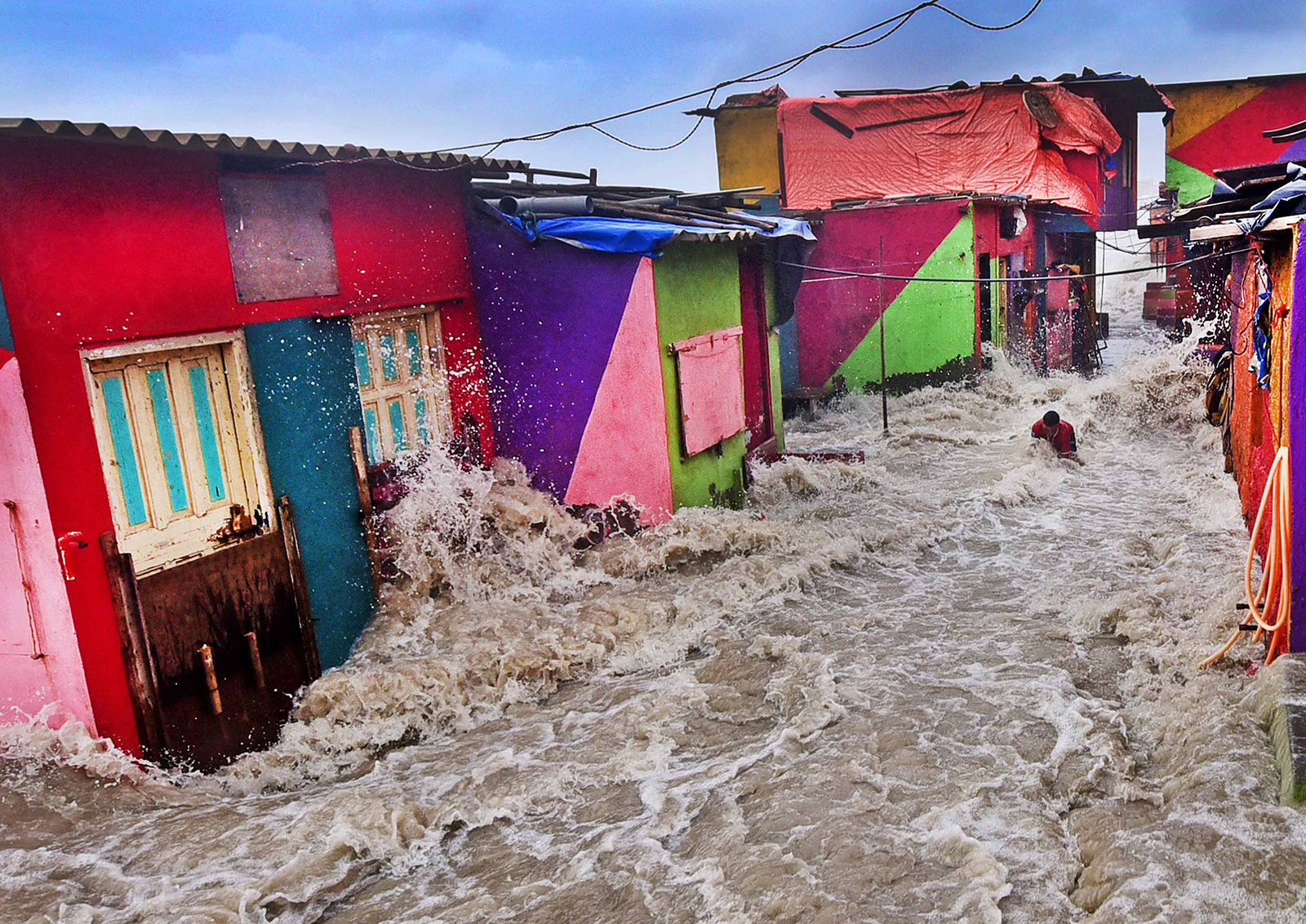 Shanti Kumar won the Environment Photographer of the Year award for the heartbreaking image ‘The Waves Entering the House.’ This bleak picture shows a wave that tossed a 40-year-old fisherman out of his house in the western suburbs of Mumbai. Fortunately, the man was rescued by other fishermen before he got too far. However, the Photographer left a lasting impression by creating this image. Shanti Kumar’s house is also where this picture was recorded.

“I believe that change is a constant phenomenon,” he says. Today, this change is manifested in the form of climate change. As a photojournalist, I see things change and unfold before my eyes. I have seen droughts, excessive rainfall, hotter summers, and colder winters. I believe this change is not good, and we need to act now; Because our passiveness and not doing anything for the environment affects the next generations.

The winner of the Young Environment Photographer of the Year 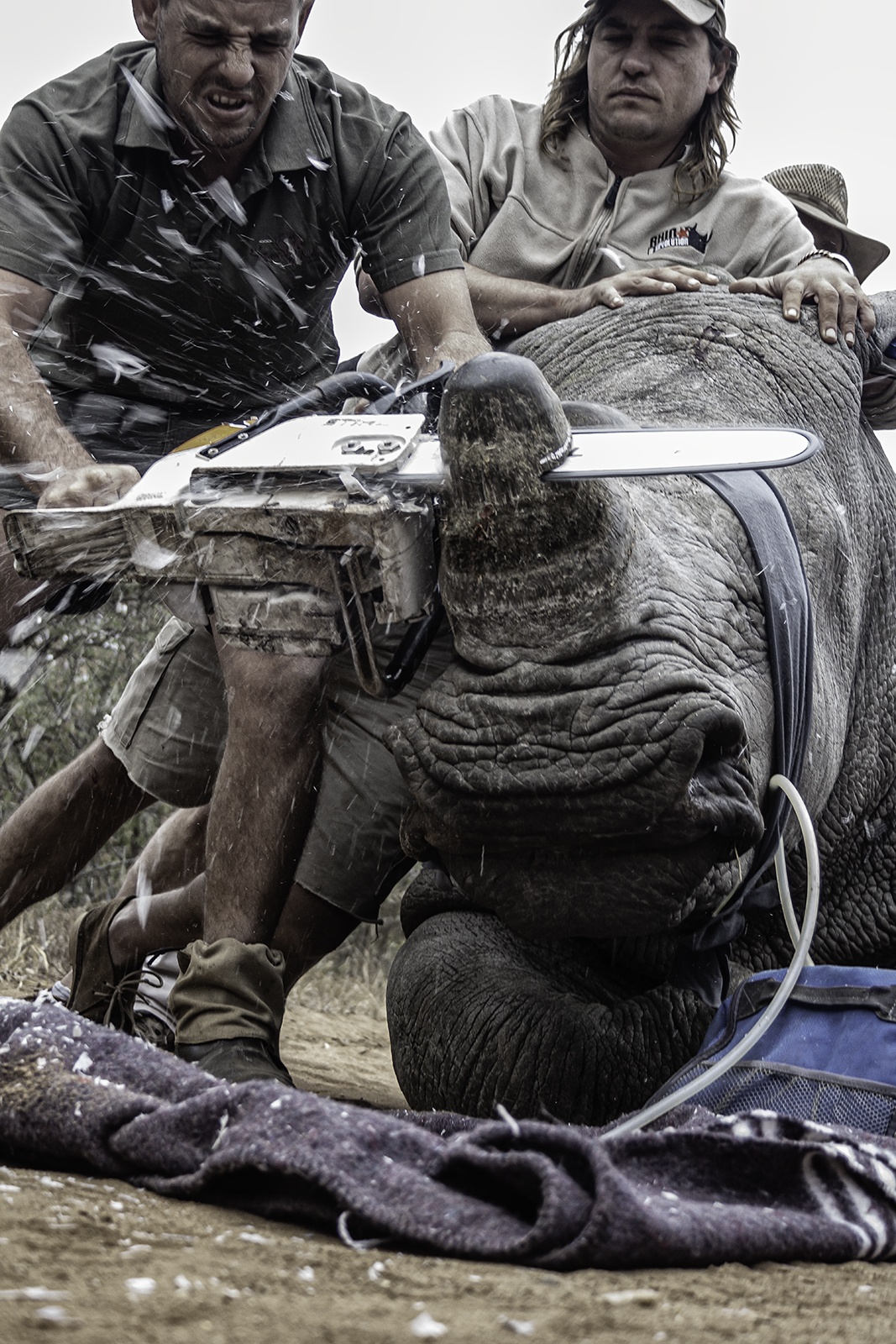 Neville Gomane from Mpumalanga in South Africa was named Young Photographer of the Year for his powerful photo of a rhinoceros being cut off at a location in Limpopo. Mpumalanga, which means the place where the sun rises, is a province in eastern South Africa, neighboring the nations of Swaziland and Mozambique. This place is a vast nature reserve with abundant wildlife. “It’s not easy for someone like me to take part in dehorning a rhinoceros,” says Neville Gomaneh, describing the photo. Because watching such a scene is not easy at all. But this is the last attempt to protect rhinos from poaching.” Worldwide, a rhino is killed every 10 hours. To end this killing, either the demand for the horns of these animals should be eradicated, or the poachers should be stopped. There is no third way. The only way to face the problem of rhinoceros killing and prevent it is to form a court.

The confiscation and confiscation of the horns themselves only interrupt the criminal operations but do not end them. South Africa is home to about 80% of the remaining rhinos. Between 2013 and 2017, more than a thousand rhinos were killed annually, and wildlife crimes have hit the country hard. The hunters, only greedy for the rhinoceros’ horns, are ready to destroy them. Rhino horn is made of keratin, the same substance in human nails. This substance is usually sold as a powder and has attracted many customers as a treatment for cancer and other diseases. A few months ago, the Guardian newspaper announced that the number of South African rhinos hunted by poachers has halved in the first six months of the year. Staying at home due to the coronavirus has disrupted the international rhino trafficking rings.

The winner of the environmental changes section 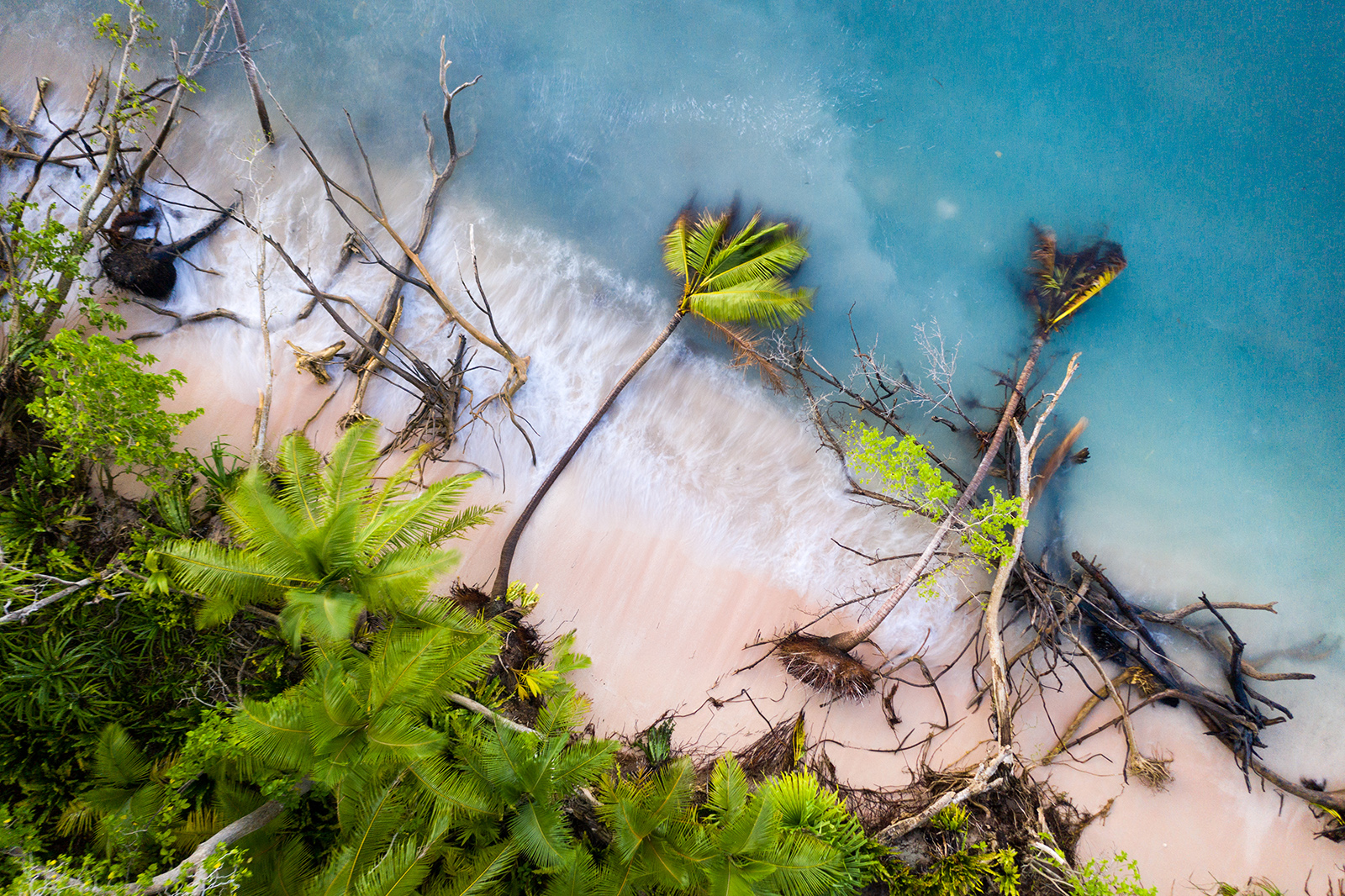 Tuvalu is an independent island and part of the British Commonwealth of Nations in the South Pacific Ocean. The nine islands of this country include small, sparsely populated coral islands and rocky islands with palm-fringed beaches. The presence of calm waters for snorkeling and diving among sea turtles and tropical fish is one of the highlights of this country. Also, several uninhabited islands are available for seabird refugees in this country. Land erosion has always been a problem for this small country in the South Pacific. In these years as well, with the rise of the sea level, the concerns are intensifying and causing more coastline flooding. This photo depicts trees falling on the beach due to the rising tide.

The winner of the sustainable cities category 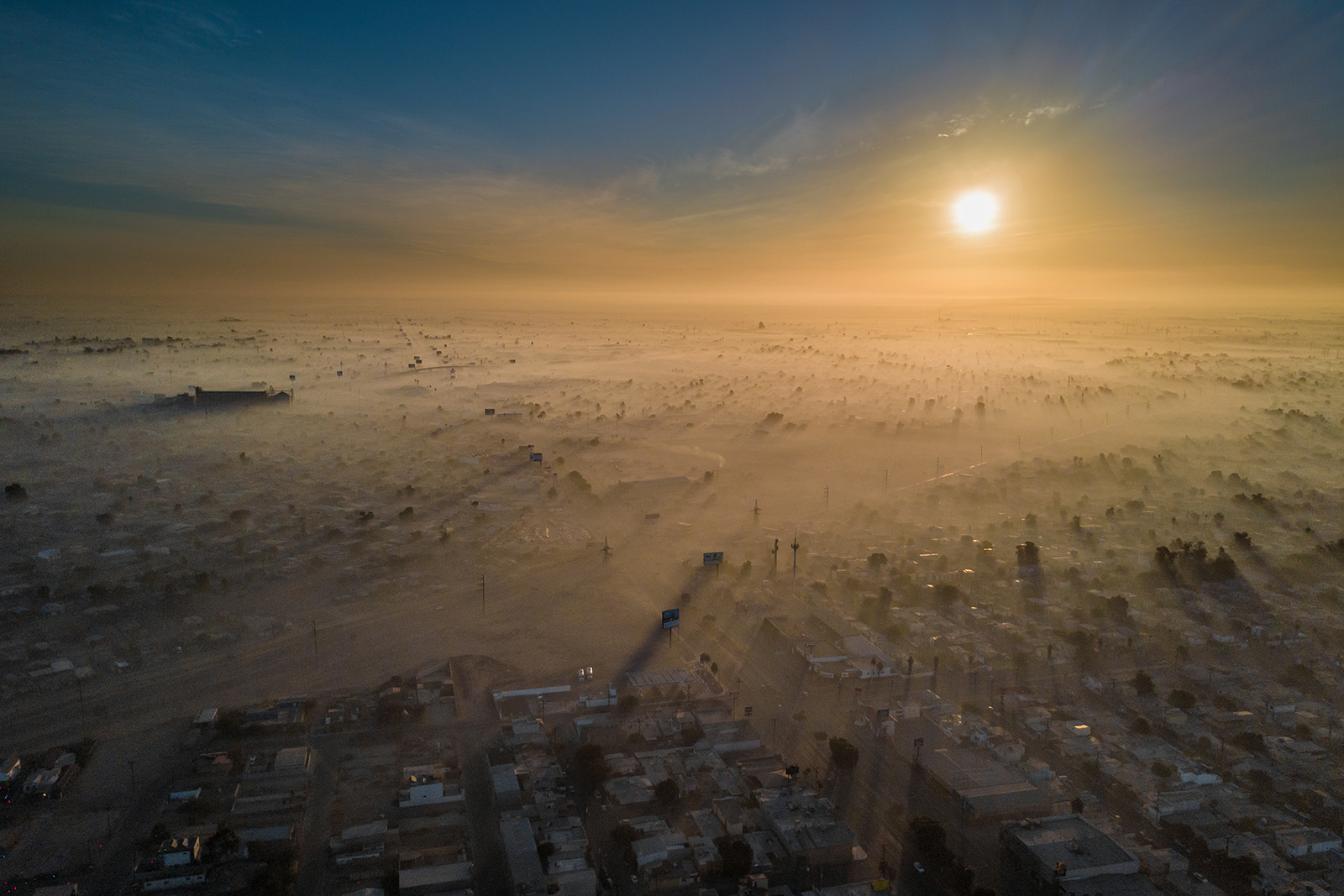 On January 1, 2018, Mexico City was one of the most polluted cities in the world. Mexicali is the capital of Baja, California, in northwestern Mexico and on the border with the United States. The production of chemicals, climate changes, geographical location, industry, and cars have led to much pollution in this city.

Winner of Water, Equality, and Sustainability

A young boy drinks dirty water due to deforestation and lack of water in the region. This water can easily endanger the health of a child. The world’s water reserves are decreasing due to climate change, excessive consumption, incorrect consumption practices in irrigation, and commercial and industrial uses. Meanwhile, nearly 700 million people in 43 countries suffer from a lack of safe drinking water. The unlimited and excessive use of water resources on earth threatens the world’s life network. Every year, the number of people who have the problem of providing sanitary water increases. According to the report of the World Water Development Organization, which was published by the United Nations on the topic of “climate change and water” in March, global water consumption has increased six times over the past 100 years. Due to population growth, economic development, and changes in consumption patterns, global water consumption should increase by about 1% annually. According to this report, 2. 7 billion people have little water for at least one month a year. Vulnerable groups such as refugees, refugees, women and children in different parts of the world have limited access to clean and safe water.

Winner of the Climate and Energy Actions category 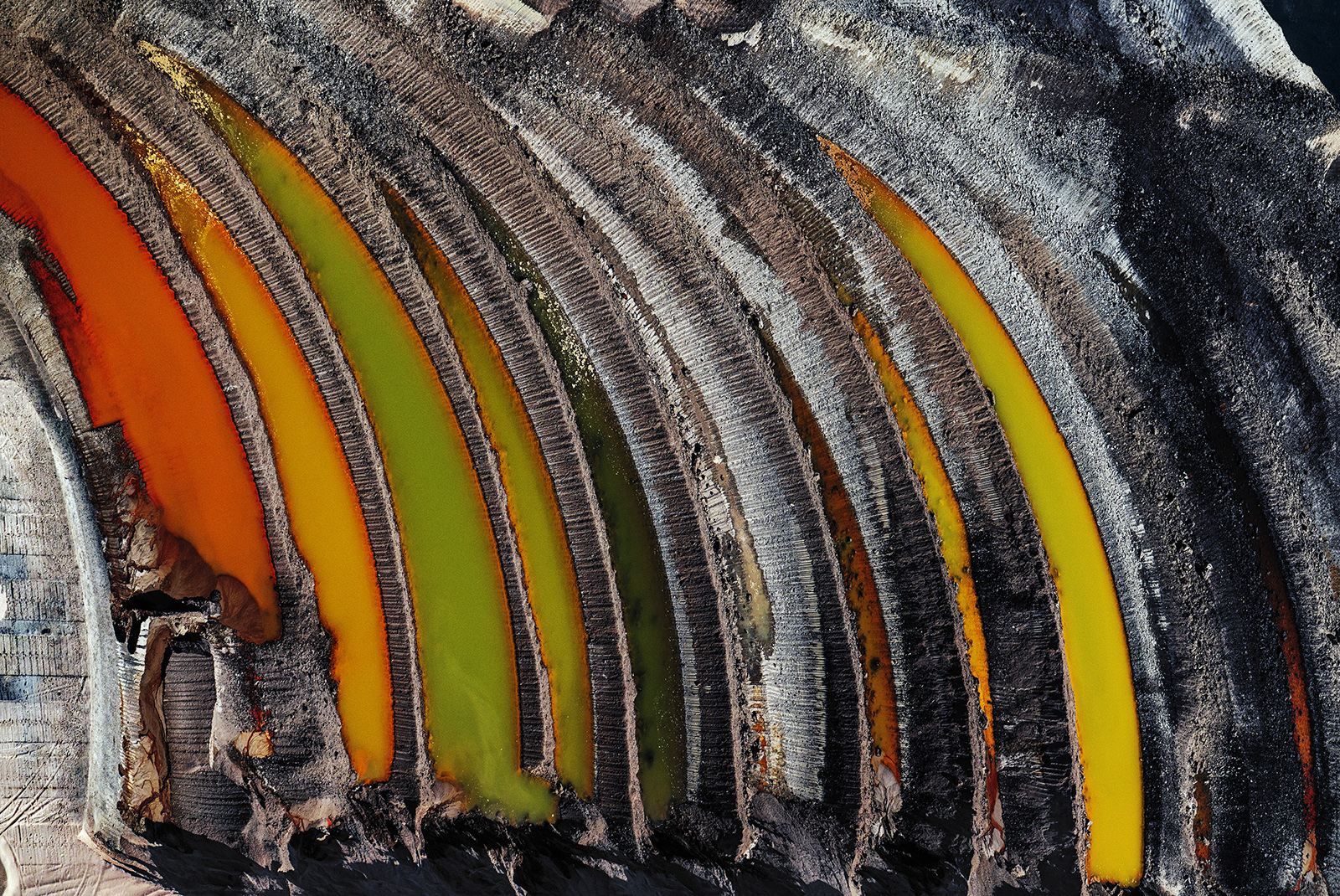 Hambach forest near the city of Cologne in western Germany is a 12 thousand years old forest. This forest dates back to the last ice age. An ancient forest once the size of Manhattan, New York, now only a few percent remains. A power company purchased the nearly 12,000-year-old Hambach Forest to mine for the brown coal buried beneath. Although Germany is abandoning the production of electricity from coal for domestic consumption to curb global warming, it still produces and exports electricity with this fossil fuel. Currently, one-third of Germany’s carbon dioxide comes from burning coal in this region. This action fuels climate change and makes life progressively more difficult for humans. So far, 90% of the Hambach forest, which once had an area of ​​more than 4,000 hectares, has been destroyed for coal mining. Villages in this area have also been destroyed. 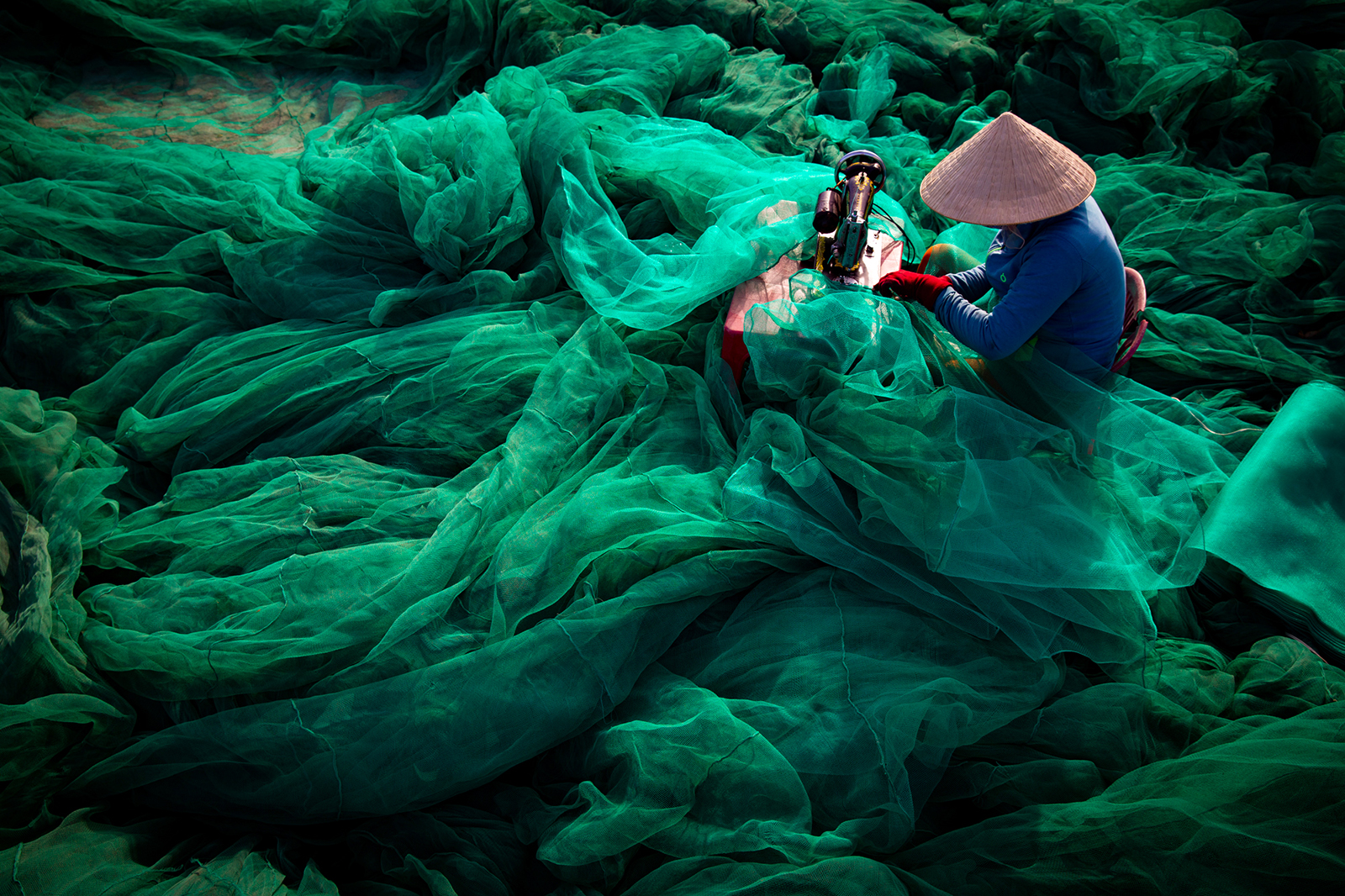 As fish stocks dwindle, fishing methods are increasingly intensified. Destructive fishing with small hole nets destroys the marine environment. Ghost nets is a term that refers to nets and fishing gear that have been abandoned in the seas and oceans. These nets continue to catch without fishermen and trap birds and every sea creature for centuries. Nets are silent killers of every marine life, from fish to dolphins, whales, and even birds. These tours differ depending on the geographical area and type of fishing. The material of these nets is mostly resistant plastic and nylon, so some of them cannot be decomposed even for 600 years. Some are invisible in water, so even divers may get stuck. This is while the divers have been trained to encounter the nets and cut them free with their diving knives. But the animals no longer have a way to escape, and with the struggle, the net wraps around them, takes their bodies, and often leads them to a gradual and painful death. International communities still do not have an approved law to deal with this trend.

At the Sisdol landfill in Nepal, waste pickers rummage through the garbage throughout the day, looking for materials or valuables to sell. Stadol Landfill receives more than 800 tons of solid waste generated daily from eighteen municipalities in Kathmandu Valley, Nepal. This temporary landfill has been operating since 2005, and currently, its capacity is running out. 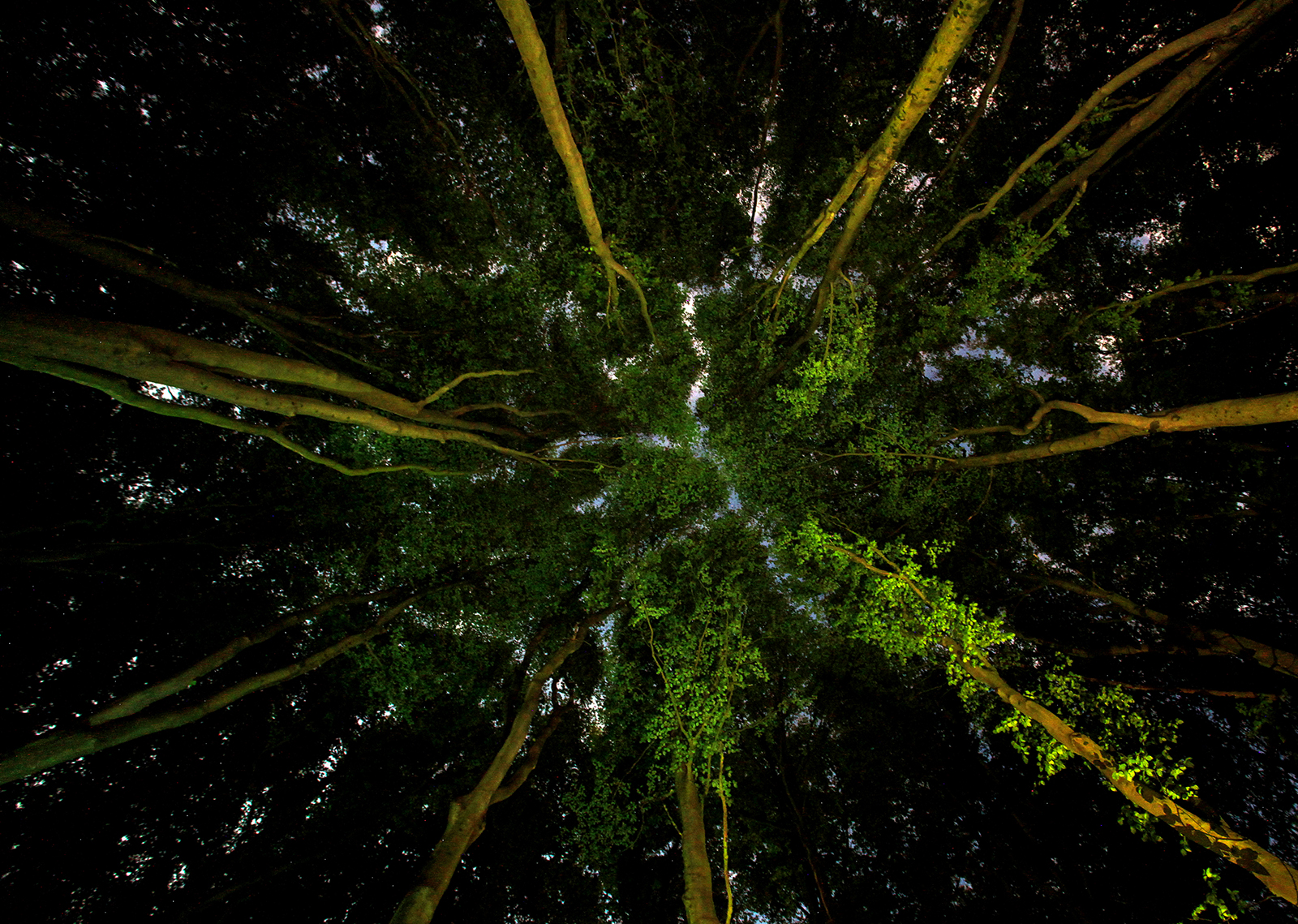 The Photographer says in the description of this photo:

Photographing trees at night with a long shutter speed and 4 LED spotlights is difficult. The slightest amount of wind can blur the image. Because of this, it took me five nights to capture this image. This image is precious to me; Because it displays trees above all its consumers. 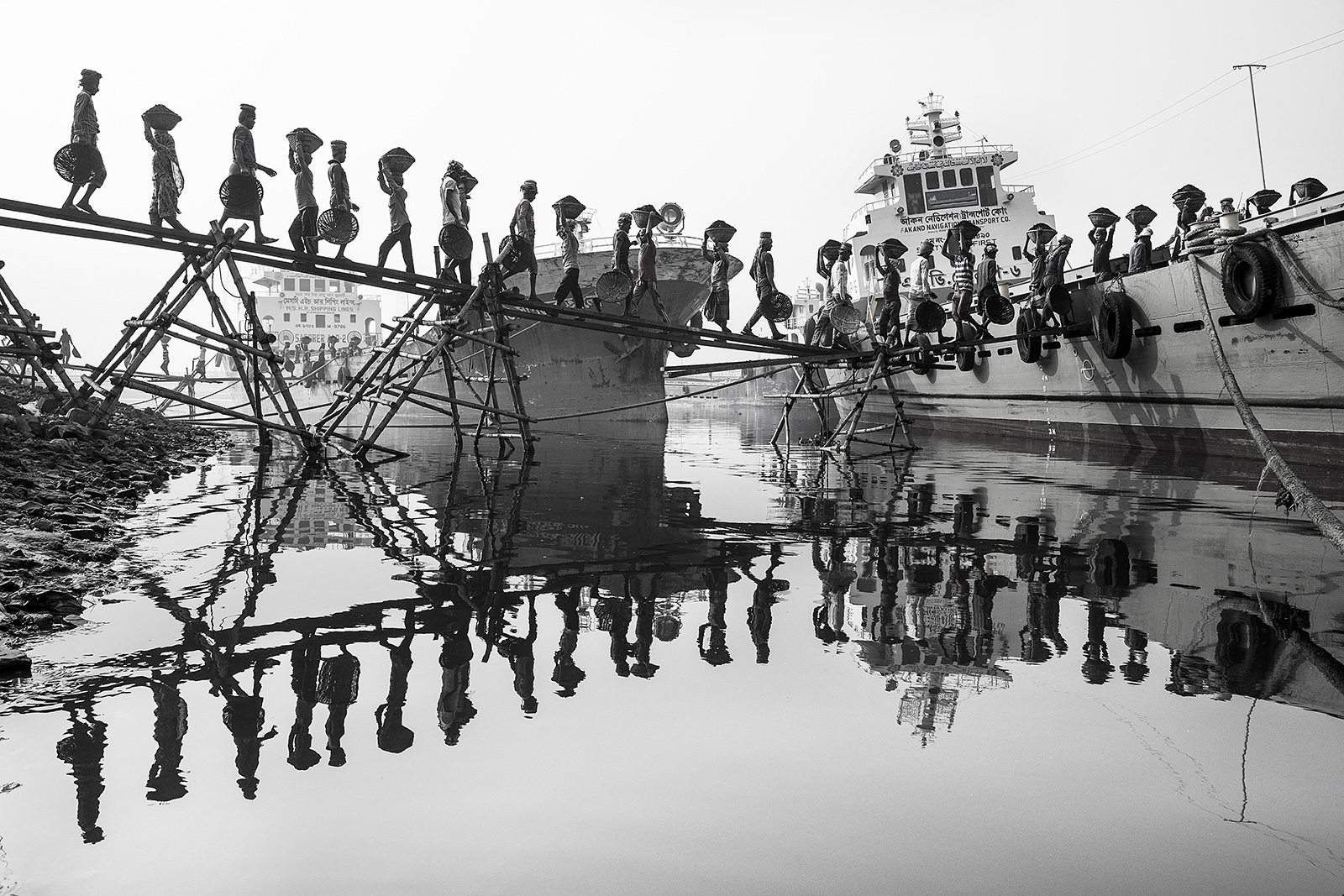 Thousands of impoverished people flock to the capital Dhaka to find work. People who fail to get good and decent jobs are now doing menial jobs like unloading coal from ships. 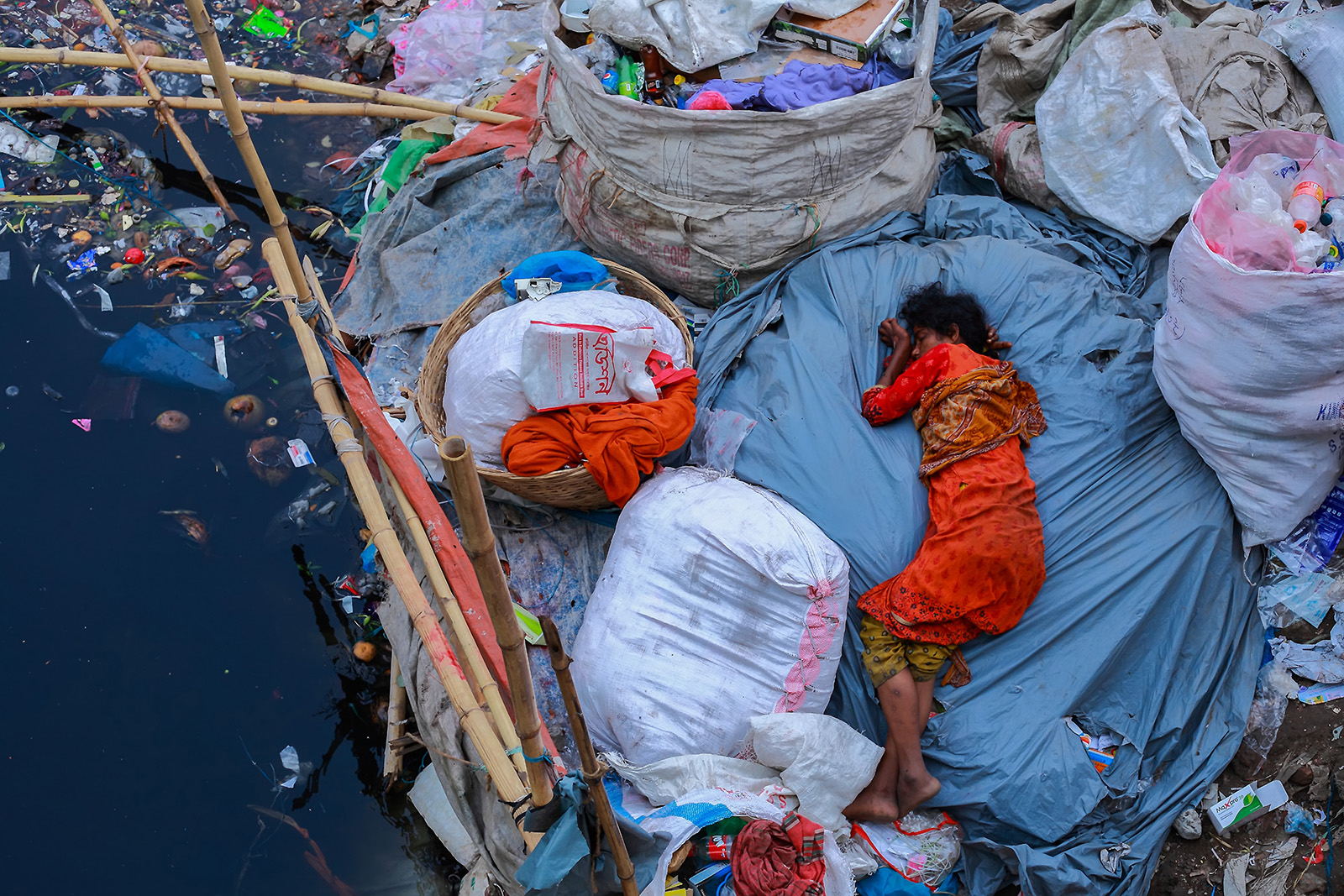 A woman sleeps on the bank of a dirty river in Dhaka, Bangladesh. River bank erosion occurs mainly due to the braided nature of rivers in Bangladesh and is common during monsoons. This problem increases due to heavy rainfall and increased water flow. Recently, due to climate change, the amount of erosion along the river bank has dramatically increased. Every year, riparian erosion causes millions of injuries. This erosion damages crops, cattle, residential structures, and agricultural lands. In addition, it destroys public infrastructure and communication systems. Dilapidated roads are likely to make access to affected people difficult and increase the time it takes to reach affected areas. 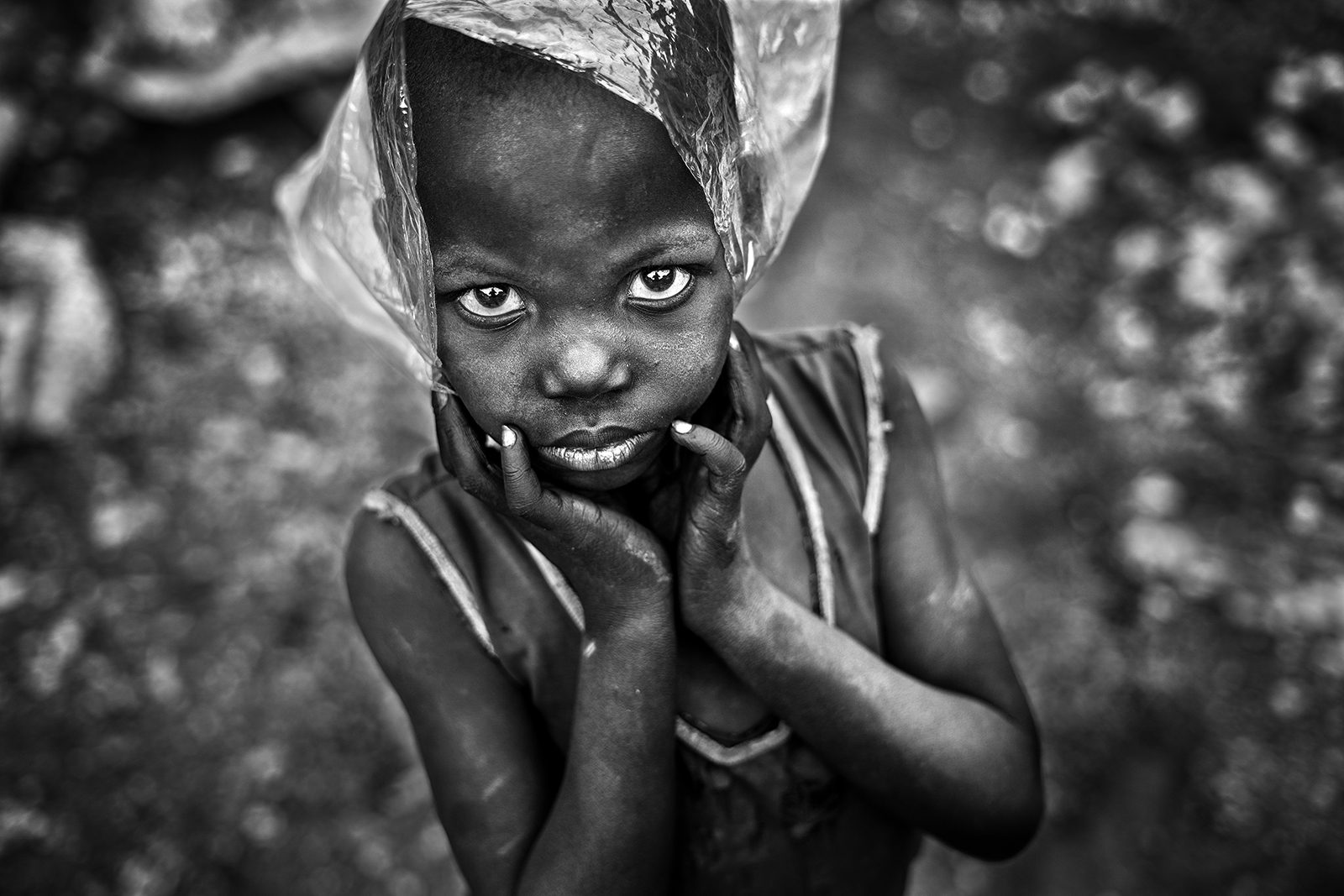 A boy is playing with a plastic bag. About 380 million tons of plastic are produced worldwide every year. Waste generation has increased exponentially from 2.3 million tons in 1950 to 448 million tons by 2015. Almost 8 million pieces of plastic pollution enter our oceans every day.

The picture was taken during cleaning the “Bosphorus” in the water project, which is a zero-waste project. The Bosphorus is a narrow, natural strait and a significant international waterway in northwestern Turkey. This narrow strait forms part of the border between Europe and Asia and divides Turkey into two halves by separating Anatolia from the European part of Turkey.